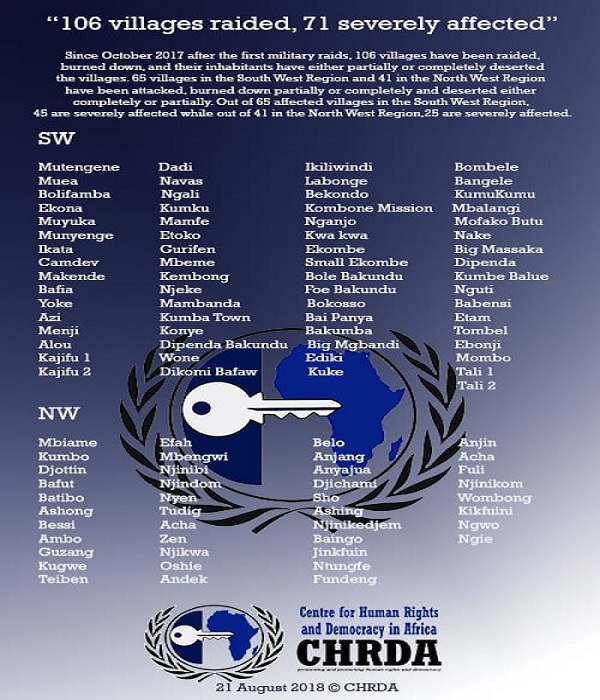 French Cameroun continues detention of more than three thousand Southern Cameroons citizens and its vicious military campaign currently going on deep within the Ambazonia territory not only shows that Biya’s human rights record as painted by the corrupt UN African structure are just a sham but also that the Biya Francophone regime are almost out of control. French Cameroun under the 85 year old dictator reportedly has the worst human rights record in Africa and the Yaoundé government is playing a game with the European Union and the United States including Canada saying they are working to improve via the so-called National Commission on Human Rights and Freedoms.

The war declared by the ailing Francophone head of state has demonstrated that French Cameroun human rights record, it’s just more of the same and even worse. The French Cameroun army particularly members of the Rapid Intervention Battalion (BIR) are executing women and children in Southern Cameroons towns and villages, which is condemned by Amnesty International, Human Rights Watch,  the International Crisis Group and other organizations.

The Acting President of the Federal Republic of Ambazonia, Sisiku Ayuk Tabe and 46 senior aides of his government have been behind bars with no legal representation ever since they were extradited from the Federal Republic of Nigeria. Cameroon Concord News gathered that Francophone public prosecutors with strong ties to the Biya Francophone regime are calling for the death penalty for all Southern Cameroons detainees.

The French Cameroun government has arrested hundreds of Ambazonian women and children and many more have escaped into the bushes as the regime intensifies its crackdown against the people of Southern Cameroons. The United Nations said in a report that some 161, 000 Southern Cameroonians have been internally displaced by the war and that some 50,000 have fled to neighboring Nigeria.

French Cameroun security officials have also intensified security measures in the Southern Zone of the Federal Republic of Ambazonia including the oil-rich Bakassi Peninsular.  The Ambazonian Interim Government under the leadership of Dr. Ikome Sako says it won’t back down on its fight for an independent state for Southern Cameroons.

The French government of President Emmanuel Macron is supporting the Francophone regime in Yaoundé and both sides have been spending billions of Franc CFA on the military in an attempt to crush the Anglophone uprising. They have destroyed Southern Cameroons infrastructures and they are killing hundreds of Southern Cameroons young men and women with little or no strong condemnation from the international community.