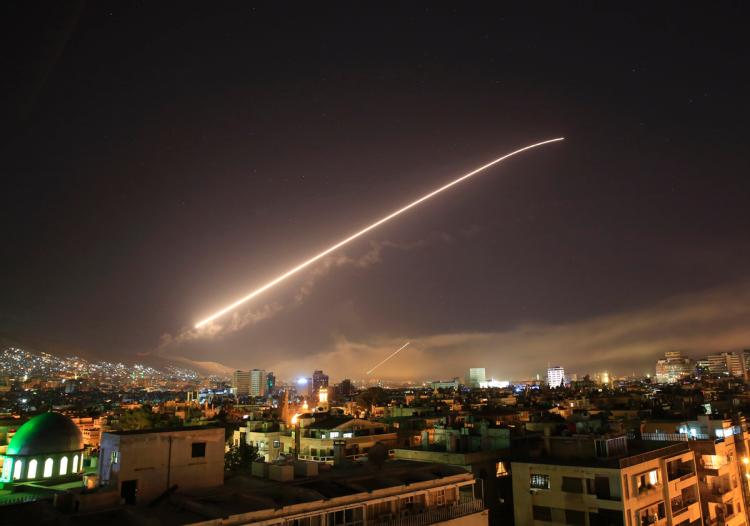 Multiple places in Syria have come under attack by US, British and French military forces after President Donald Trump ordered a military strike against the country despite international warnings against further escalation of the situation.

“A short time ago, I ordered the United States Armed Forces to launch precision strikes on targets associated with the chemical weapons capabilities of” Syria, Trump said in a televised address from the White House on Friday evening.

He also warned Russia and Iran, which have been assisting Syria in its counter-terrorism campaign, to end their support for the Damascus government, but said, “hopefully, someday we’ll get along with Russia, and maybe even Iran, but maybe not.”

US officials said that Tomahawk cruise missiles and other types of bombs were used in the attack.

British Prime Minister Theresa May also said she authorized the British armed forces to conduct coordinated and targeted strikes, noting, “I have done so because I judge this action to be in Britain’s national interest.”

“We cannot tolerate the normalization of the use of chemical weapons,” he said in a statement issued shortly after huge explosions were heard in Damascus early Saturday followed by the sound of airplanes overhead.

The three countries used an alleged chemical attack in the Eastern Ghouta suburb of Damascus last week as a pretext for their military action. They blame the Syrian government for the attack, without offering any evidence.

Syria has strongly rejected any role in the suspected attack, which came just as the Syrian army was about to declare full victory against the militants operating in the region.

Russia said the chemical attack was staged by desperate militants to provoke further intervention in the conflict by the West.

“I support the actions taken by the United States, the United Kingdom and France,” NATO Secretary General Jens Stoltenberg said in a statement, claiming … the campaign will reduce the ability of Syria to launch chemical attacks.

The Britain-based Syrian Observatory for Human Rights said the strikes hit bases and chemical research centers around the capital Damascus.

A Reuters witness said that at least six loud explosions were heard in Damascus with smoke rising over the Syrian capital where a second witness said the Barzah district, the location of a major Syrian scientific research center, was also hit in the strikes.

US Secretary of Defense Jim Mattis said in a press briefing that the air strikes on targets in Syria were a “one time shot,” noting that future strikes will depend on whether the Syrian government uses chemical weapons.

The Pentagon chief added that the US and its allies struck Syria harder than they did last year.

General Joseph Dunford, the highest-ranking officer in the US military, said Russia’s forces in Syria had been warned through existing “deconfliction” channels that Western planes would be in Syrian air space.

There have been contradictory reports on the number of missiles fired on Syria. A pro-Syrian government official said 30 missiles were fired, but the Pentagon put the number at 100.