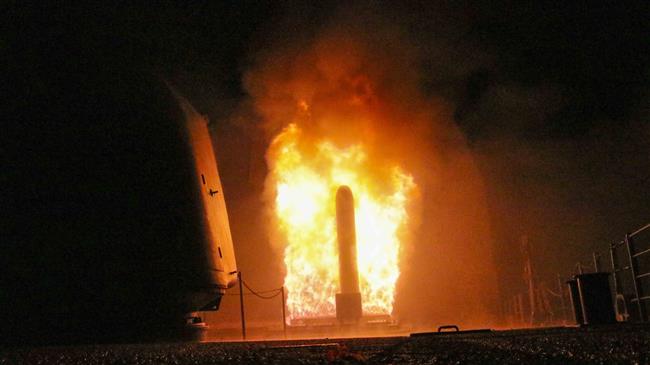 Syria has handed over to Russia two unexploded cruise missiles it discovered in the aftermath of the recent attack by the United States, Britain and France, Syrian sources say.

“Two cruise missiles that did not detonate during the US missile strike on Syria overnight on April 14 were found by the Syrian military. Both are in rather good condition. These missiles were handed over to Russian officer the day before yesterday (April 17),” a source in the Syrian Defense Ministry told Russia’s TASS news agency on Thursday.

The Syrian military sent the missiles over on board a plane on Wednesday, the source added. The Russian Defense Ministry had yet to confirm the report.

On April 14, US President Donald Trump along with his French counterpart, Emmanuel Macron, and British Prime Minister Theresa May authorized a joint missile attack against alleged chemical weapons manufacturing sites inside Syria.

The attack, carried out in response to what the US and its allies insisted was a chemical attack by the Syrian government, saw 105 cruise missiles being fired at targets in Damascus and Homs.

It was not clear whether the discovered missiles were American Tomahawks or Scalp/Storm Shadow, codenames for a cruise missile jointly developed by France and the UK.

However, there is a good chance that the missiles were fired by the US military as the UK and France only fired 20 missiles collectively.

Days before the attack, Trump had warned Russia, a key supporter of Damascus in the war against foreign-backed militants, that it should get ready to shoot down “nice and new and smart” US missiles over Syria.

Despite claims by the US military that all missiles hit their targets, the Russian defense ministry said after the attack that 71 missiles were intercepted by Syria’s air defense, which relies on Russian equipment.

This is while none of the missiles landed in Tartus and Hmeymim, where Russian missile defense systems, namely the advanced S-400 system, were deployed to protect Russian bases. Russia did not use its own systems to intercept the missiles.

Trump pressed ahead with his plans to attack despite a decision by the Organization for the Prohibition of Chemical Weapons (OPCW) to send a fact-finding mission to the alleged chemical attack in Syria’s Douma upon requests from Moscow and Damascus.

The Russian center for the reconciliation of conflicting parties examined Douma on April 9, two days before the purported gas attack, to find no traces of chemical weapons.