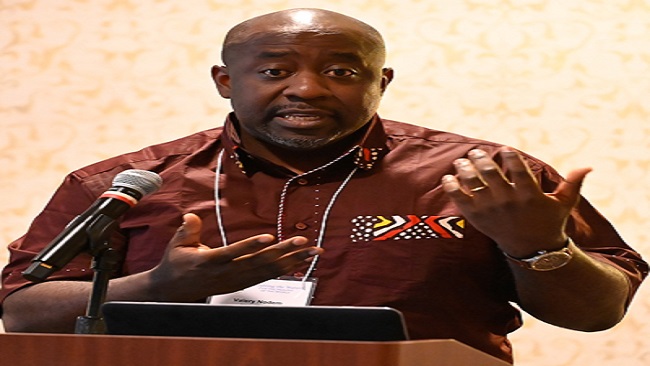 Nodem, who’s from Cameroon, is the Presbyterian Hunger Program’s Associate for International Hunger Concerns. Serving in Lima, Peru, Koball is a mission co-worker serving with the Peru Joining Hands Network.

Nodem spoke about colonization and globalization. He said that although Cameroon gained its independence from Great Britain and France 60 years ago, it’s as if colonizers are still present. In part that’s because Cameroon’s natural resources — including oil, timber and coffee — are exported. Value is added in other countries, and the money made by selling those products remains outside Cameroon’s coffers.

He identified three drivers of colonization in Cameroon: gold, God and glory. The first two are fairly well-known: colonizers had a financial interest in extracting natural resources and were also interested in converting people to Christianity. The “glory” part “was about showing your influence,” Nodem said. “What resources did you find there? It was about showing power.”

As a result of the 19th century “Scramble of Africa,” countries were sliced up arbitrarily, he said. “They weren’t thinking about the consequences” of the warfare those practices would help bring about.

“Colonization makes people feel powerless in their own country,” he said. “The system is still strongly governed by foreign powers who robbed countries of a lot of resources. It’s ripped up regions that used to live in peace.”

As a college student in Cameroon, Nodem “was always going to pretty much any demonstration,” he said. “My parents were always upset. They said, ‘Stay out of trouble and don’t do anything.’” Later they told him it’s because they feared for his life.