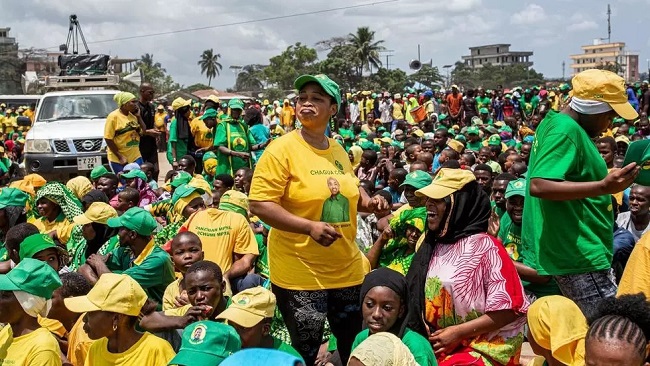 Tanzania to hold election marred by violence, concerns over fairness 0

Tanzanians will vote Wednesday amid rising concern for democracy under President John Magufuli, who is seeking a second term, and with tensions high in volatile Zanzibar, where violence erupted ahead of the vote.

Long deemed a haven of stability in East Africa, observers say Tanzania has seen a worrying crackdown on the opposition and freedom of speech under the 60-year-old Magufuli and his Chama Cha Mapinduzi (CCM) party, which has been in power since 1961.

Magufuli is counting on his ambitious programme of infrastructure development and fiery anti-corruption stance to secure him a second mandate and called for a peaceful vote.

“For those who qualify, vote and go home. Let the electoral body do its work. Peace is very important and I pray it dominates the polls,” he said Tuesday.

He returned to the country in July after three years abroad recovering from 16 bullet wounds sustained in what he believes was a politically-motivated assassination attempt.

Lissu’s return has reinvigorated an opposition demoralised by a ban on political rallies outside of election time, multiple arrests, attacks, and what rights groups have slammed as the squeezing of democracy.

“I have witnessed through the campaign that Tanzanians are ready for changes and I believe they will turn out to vote tomorrow,” he said at his final rally.

In a boost for the opposition’s chances, Zitto Kabwe, the head of the popular ACT-Wazalendo party, has endorsed Lissu for the presidency on the mainland.

In return, Chadema is backing veteran opposition candidate Seif Sharif Hamad in his sixth bid for the presidency in Zanzibar, this time against CCM candidate Hussein Ali Hassan Mwinyi.

Zanzibar has a history of tense elections plagued with violence and irregularities and the opposition has again accused the ruling party of seeking to steal the vote.

The archipelago held an early vote for security forces Tuesday which prompted violence that the opposition says left 10 dead and scores injured.

“How can you have an election were you have teargas everywhere and live ammunition? It is in no case a fair election, it is just a farce,” said Hamad.

Trucks loaded with soldiers, police and a militia linked to the ruling party known as “zombies” — clad in black with their faces covered by bandanas — whizzed throughout the city and on Tuesday were seen rounding up and beating several civilians.

Britain’s envoy, David Concar, urged “all involved in the elections to act with restraint and integrity to ensure the will of the people can be expressed peacefully at the ballot box”.

Magufuli, elected in 2015, at first made wildly popular moves such as curbing foreign travel for government officials or showing up in person to make sure civil servants were doing their work.

Then, he banned political rallies and became increasingly intolerant of dissent.

The opposition and analysts have expressed serious concerns about the fairness of the election, pointing in particular to a polls body comprising commissioners personally appointed by Magufuli.

Magufuli touts his expansion of free education, rural electrification and infrastructure projects such as railways, a hydropower dam set to double electricity output and the revival of the national airline.

However analysts say while the economy grew at an impressive pre-coronavirus average of six percent, there was little job creation and aggressive tax collection has hurt the private sector and made doing business harder.

The IMF expects growth to slow to 1.9 percent this year.

The election campaign has taken place with little regard to the coronavirus pandemic. Tanzania stopped giving out official data on infection numbers in April, and Magufuli has declared the country Covid-free, which he attributes to the power of prayer.