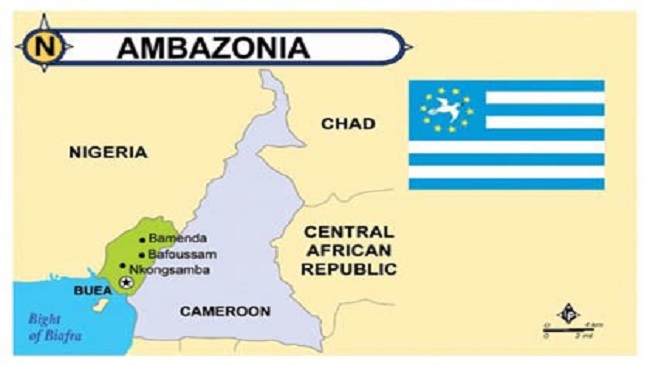 The Ambazonian Trial in Yaounde 0

A separatist leader from the anglophone west of Cameroon went on trial Thursday on charges of”terrorism” and “secession” over unrest that has claimedhundreds of lives.

Julius Sisiku Ayuk Tabe, president of the self-declared “Republic of Ambazonia”, was arrested in neighbouring Nigeria and extradited to Cameroon in January this year along with 46 others.

The military court in the capital Yaounde is trying Ayuk Tabe and nine co-defendants on charges of “condoning and financing terrorism” as well as insurrection and “hostility against the motherland”.

Cameroon’s 22 million people are mainly French-speakers, but around a fifth are English-speaking, concentrated in the Northwest and neighbouring Southwest regions of the West African country.

Resentment at perceived discrimination against anglophones in education, the judiciary and the economy fanned demands for autonomy in 2016.

Then last year, as longtime President Paul Biya refused any concessions, radicals declared the independent state of Ambazonia and took up arms.

Attacks by the secessionists and a crackdown by the authorities have led to the death of at least 500 civilians as well as more than 200 members of the security forces, according to the International Crisis Group (ICG).

More than 300,000 people have fled the violence, many of them living hand-to-mouth in the forests, and some across the border into Nigeria. Clashes persist on a near-daily basis. Ayuk Tabe and most of his co-defendants make up the political wing of the separatist movement, advocating negotiation with Yaounde.

The court rejected a demand for Ayuk Tabe’s release from detention in mid-November. The trial was adjourned Thursday to January 10 to allow the defence – comprising more than 80 lawyers – to study the charges. The prosecution plans to call 70 witnesses, according to a list seen by AFP.