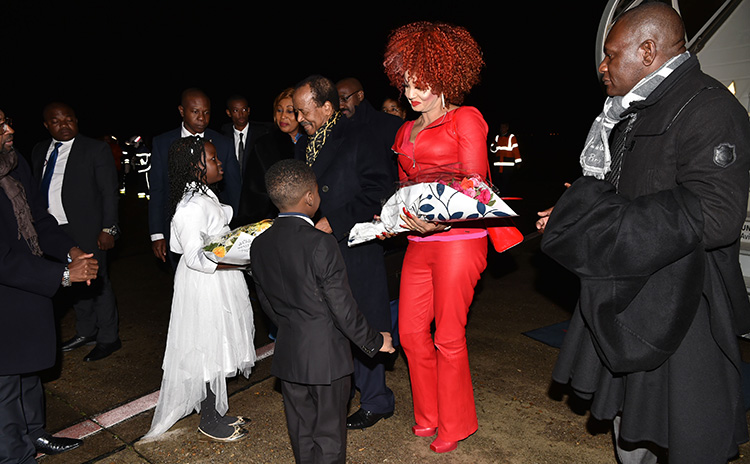 The Butcher of Yaounde is in Paris 0

French Cameroun dictator popularly known as “the monarch” and his wife Chantal Biya arrived France on Sunday 10 November 2019 to attend the Paris Peace Forum, scheduled to hold from 11 to 13 November 2019.

The French surrogate shied away from the Russia-Africa Summit that held at Sochi but is already in the French capital Paris barely a few weeks after he attended the Global Fund’s Sixth Replenishment Conference to fight AIDS, Tuberculosis and Malaria, from 9 to 10 October 2019 in Lyon, France.

French authorities are indeed conscious of the primordial role the butcher of Yaoundé is playing in the CEMAC region in guaranteeing France’s grip on the natural resources of the countries within the sub Saharan region.

State media reported that Biya landed at the Bouget airport in Paris at about 6 pm and was received by the French Cameroun’s Ambassador to France Alfred NGUINI. The 86 year old leader later on checked in at his hotel of residence in the First District of Paris, where he was greeted by huge demonstration staged by French speaking Cameroonians who demanded an arrest warrant for the failed leader.

The Paris Peace Forum is an occasion for world leaders to reflect on global issues related to peace, climate change, human and social development in view of identifying solutions that can foster harmonious development strategies. The opening ceremony will take place on Tuesday 12 November 2019.