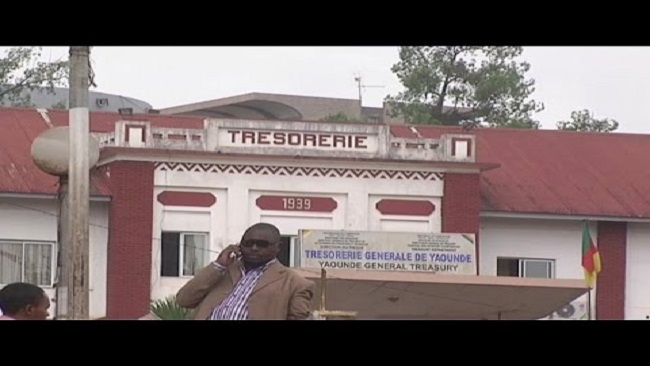 The End of an Era: Cameroon’s National Treasury on Fire (Video) 0

As the end of the Biya government draws to a catastrophic end, members of the crime syndicates inner circle are gradually erasing any incriminating evidence through massive destruction of files and electronic systems.

After having siphoned off millions of taxpayers’ money abroad for personal purposes, the Betis Mafia that has lots of skeletons in its cupboard has resorted to burning down institutions that will clearly reveal the scope and depth of the corruption that has characterised the Biya regime for close to 40 years.

The national treasury, which has become Mr. Biya’s ATM, has been set ablaze on Friday, July 24, 2020 at an ungodly hour to ensure that even firefighters do not intervene to put out the fire.

The inferno has affected mostly the floors that host IT equipment and key files that contain information on the financial corruption that has transformed the country into an Augean Stable.

A source in the country’s Treasury and the Ministry of Finance has just informed the Cameroon Concord News Group that many Cameroonians of Beti extraction have been expressing grave concerns about their future when Mr. Biya, the architect of the massive corruption in the country, would be dead and gone.

The source added that the pressure and tension are palpable and many Cameroonians are concerned about the country’s future, especially as it is becoming obvious that civil servants might soon go without a salary for months.

“A lot of financial malfeasance has taken place in the country, but the mess playing out in the ministry of finance and the national treasury will take decades to be cleaned out,” the source said.

“The country’s wealth and riches are in the hands of a few people who are either members of Mr. Biya’s ethnic group or members of the ruling CPDM which is holding the country’s treasury under its armpit,” the source added.

“Cameroonians have been reduced to beggars in their own country by a bunch of people who have placed their interest above national interest,” he regretted.

“When you see Cameroonians gravitating towards the CPDM, it is not because the party has a good ideology that can result in any development. The CPDM is keeping the National Treasury and all Cameroonians are hungry. If they must eat, then they must praise Mr. Biya and his crime syndicate. These folks have been sharing our money to Cameroonians as if they are distributing candy to children,” he lamented.

“The way the country has been run over the last 40 years really leaves much to be desired. There is no difference between the ruling party and the state. Cameroonians have been dehumanized. From every indication, it is clear that the ruling party’s objective is to pauperize the population in order to bring it under control,” our source added.

“The most painful thing is that this fire will only trigger the creation of multiple commissions for the investigation of what has happened and after those investigations, no heads will roll and it will be business as usual. This is the most outrageous way of ruling a country,” the source lamented.

“I am certain that this fire is the handiwork work of people who have something to hide. Once the dust will settle, most of them will be given promotions and very soon, you will see them on TV praising the president for his great leadership and vision,” the source said.

“This has been their modus operandi for decades and those praises seem to be music to Mr. Biya’s ears. He hardly sanctions anybody and this has created impunity in the country. If he sanctions anybody, know that the person has been set up by another group because at this time, there are lots of succession battles taking place in Yaounde. His era is coming to an end, so many people are flexing their muscles to take over. However, those who have openly demonstrated their ambition have ended up at the Yaounde Maximum Security Prison known as Kondengui,” the source said.

“This country needs change. Cameroon needs divine intervention. Everything is going down the drain. This government has set the country back by at least a century. Cameroonians are helpless. Poverty has emasculated them. Many have lost their voices. Besides, the intimidation from government officials and their surrogates has robbed the population of its voice and dignity. We all are really looking forward to the day that change will come,” he concluded.