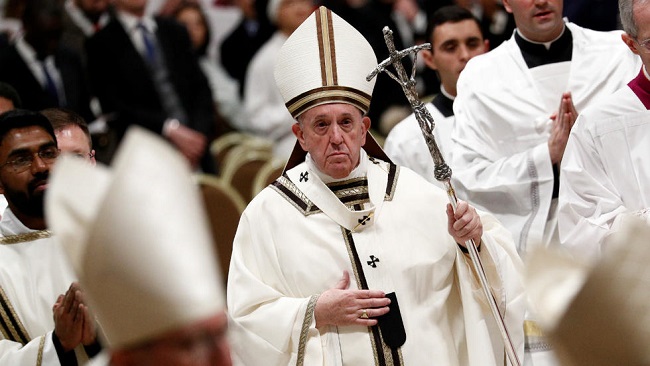 Pope Francis called on Sunday for global solidarity in fighting the coronavirus pandemic and its economic fallout, urging the relaxation of international sanctions, debt relief for poor nations and ceasefires in all conflicts.

“May Christ our peace enlighten all who have responsibility in conflicts, that they may have the courage to support the appeal for an immediate global ceasefire in all corners of the world,” the pope said in a live streamed Easter message.

He condemned arms manufacturing and said the pandemic should spur leaders to finally end long-running wars such as that in Syria. He also appealed for help for migrants and others suffering from existing humanitarian conflicts.

The pope also warned the European Union that it risked collapse if it did not agree on how to help the region recover.

The pope’s Easter “Urbi et Orbi” (to the city and the world) message, delivered from an empty St. Peter’s Basilica instead of to the usual crowd of tens of thousands in the square outside, was by far his most pressing and political since his election in 2013.

Saying the message of this year’s “Easter of solitude” should be a “contagion of hope,” he heaped praise on doctors, nurses and others risking their lives to save others and hailed those working to keep essential services running.

“This is not a time for indifference, because the whole world is suffering and needs to be united in facing the pandemic,” he said in the message, almost entirely dedicated to the pandemic’s effects on personal and international relations.

“Indifference, self-centredness, division and forgetfulness are not words we want to hear at this time. We want to ban these words forever!” he said.

Easter in the time of Covid-19

Francis expressed sympathy for those not able to bid farewell to their loved ones because of restrictions, for Catholics who have not been able to receive the sacraments and for all those worried about an uncertain future.

“In these weeks, the lives of millions of people have suddenly changed,” he said.

The pope said it was up to politicians and governments, too, to avoid “self-centredness” and take decisive, concerted action to help each others’ populations live through the crisis and eventually resume normal life.

“May international sanctions be relaxed, since these make it difficult for countries on which they have been imposed to provide adequate support to their citizens,” Francis said.

He also called for debt reductions or forgiveness for the poorest nations, without naming any countries.

Francis expressed particular concern for the future of Europe, saying it was vital that rivalries that existed before World War Two “do not regain force” as a result of the pandemic.

European Union nations are divided over how to help the continent’s economy recover – with Italy and other eurozone members seeking the issuance of euro bonds backed by all, but Germany, the Netherlands and other countries opposed to this.

“The European Union is presently facing an epochal challenge, on which will depend not only its future but that of the whole world,” Francis said.

That echoed a position by Italian Prime Minister Giuseppe Conte, whose country has suffered one of the highest death tolls from Covid-19.

“This is not a time for division,” Francis said.