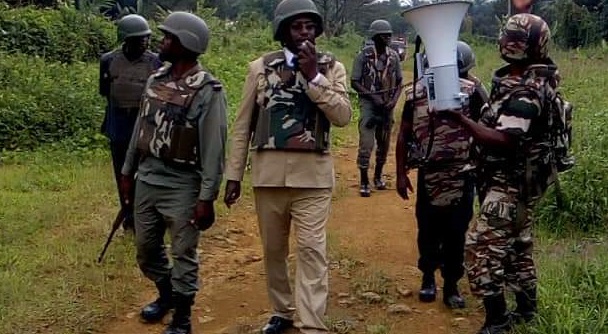 The Holy Spirit, Biya’s DO and Amba Fighters in Ndian County: The AGBAW-EBAI DEBATE 0

The Divisional Officer for Mundemba in Ndian was recently accompanied by a female Mummy of the Lord Jesus, supported by the Commander of the 22nd Regiment of the Cameroon army stationed in Bafumar on a mission to Bessingui and Meka Ngolo aimed at getting Ambazonian restoration forces to drop down their weapons.

Cameroon Concord News understands that with an outdated public address system, the French Cameroun delegation successfully achieved their goal as some Southern Cameroons fighters including the Ambazonian commander of Ndian 1, General DADY DIBALLA came out of the forest neatly dressed with a mobile phone, bowed, trembled and surrendered.

General Dady Diballa reportedly made a soul searching appeal to all Ambazonian forces in Ndian to come out of the bushes and pay allegiance to the so-called Father of the Nation, President Biya. Many in Ndian County now believe that the Holy Spirit guided the mission.

In this edition of the AGBAW-EBAI DEBATE we are asking our readers to make known their opinions on this religious happening in Ndian County.