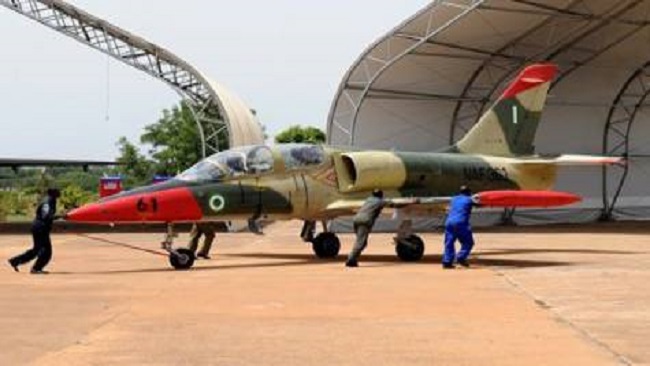 Nigeria has been trying to contain the insurgency confronting it with all possible means. The Nigerian Air Force (NAF) has started playing a major role in this mission and has intensified air operations in North Eastern Nigeria.

NAF operations from December 20-22, 2017 neutralized scores of Boko Haram Terrorists (BHT) in Tumbun Rago, a settlement in the northern fringes of Borno state, bordering Lake Chad. The operations started with an intelligence, surveillance and reconnaissance (ISR) mission. This was followed by air interdiction to strike the identified targets. Then came Battle Damage Assessment (BDA) missions after the strikes to assess the nature and extent of damage to the targets. Finally, follow on mop up operations by helicopter gunships at multiple locations enhanced the degree of target neutralisation. A similar operation was carried out by NAF in conjunction with the Nigerian Army (NA) on January 3-4, 2018 in Sambisa, Njimia and Camp Zairo. These operations constitute a classical example of air power employment in anti-insurgency operations.

Nigeria is one of the most affluent and powerful West African countries, with the highest GDP in the continent. It shares land boundaries with four countries — Niger, Benin, Chad and Cameroon. The cumulative combat power and national power of these four neighbours is less than that of Nigeria by a large margin. The differential in combat air power between Nigeria and these four countries is even more glaring. Consequently, the prime focus of Nigeria’s creation and employment of air power has been to manage internal conflicts and insurgency, besides ensuring the protection of the coastline and exclusive economic zone (EEZ). The country is nearly square shaped (1100 km long and 1000 km broad). The three military air bases are strategically located and over 30 airstrips evenly spread across the country allow an efficient application of air power.

The only combat aircraft in the NAF inventory at present are 14 Chinese built F7 procured in 2005-08. MiG-21s and Jaguars have been phased out. For counter insurgency (COIN) operations, it has 13 Alpha Jets, 23 L-39 and 12 MB-339 aircraft, besides 11 attack helicopters made up of Mi 24/Mi 35s. The further growth trajectory of Nigerian air power can be assessed by analysing its defence budget and likely procurements. The proposed defence budget for 2018 with an allocation of $1.5 billion has nearly 77 per cent earmarked for salaries and overheads. This limits the funds available for modernisation and up-gradation. Out of this limited modernisation budget, an allocation of $66.32 million is planned for aviation assets, including payment for three light utility helicopters for the army, two helicopters for the air force, one UAV for the navy, and for the maintenance of two Alpha Jet aircraft and one C-130 transport aircraft. Nearly 53 per cent of the money earmarked for aviation assets is for part payment for the acquisition of three JF-17 Thunders from Pakistan.

A significant event took place on December 27, 2017 when the US Ambassador to Nigeria, Stuart Symington, presented the Letters of Offer and Acceptance (LOA) in respect of 12 A-29 Super Tucano Aircraft to the NAF. This will no doubt boost the NAF’s airpower potential. The Trump administration’s offer reverses the Obama administration’s decision to block the sale of military hardware to Nigeria. The LOA represents the official US Government offer to sell defence articles and services to the Nigerian Government. It is expected that the LOA would be signed and necessary payments made before February 20, 2018, to ensure the commencement of the production of these aircraft.

The $593 million deal includes aircraft, weapons, training, spare parts, aviation and ground support equipment, hangar, facilities, and infrastructure. These aircraft will augment the NAF effort in operations against the Boko Haram and ISIS West Africa, as well as Nigerian efforts to counter illicit trafficking both within the country and in the Gulf of Guinea. The deal also includes $29 million worth of weapons including 200 GBU-12/58 Pave Way II tail kits, 400 laser guided rockets, 2,000 MK-81 (250lb) bombs, 6,000 unguided rockets, 20,000 rounds of .50 calibre machine gun ammunition, seven AN/AAQ-22F electro-optical/infrared (EO/IR) sensor and laser designators. In addition, all aircraft sold will include weapons software to support forward-looking infra-red (FLIR). Nigeria’s defence budget of 2018 will have to provide for this deal at the expense of some other equipment.

This deal, on fructification, will permit sustained and effective round the clock COIN operations by the NAF. The combination of sensors and precision weapons will be difficult for the insurgents to beat. Precision strikes by the proposed low-calibre guided weapons will also reduce the probability of collateral damage. However, the mission can be effective only when it is supported by adequate ISR and suitable communication grids. NAF is presently not very well equipped in this regard. With the available ISR resources, it will not be possible to fully exploit the offensive assets on its inventory. NAF has a large area to cover for surveillance and monitor activities in specific sectors on a round-the-clock basis. The time lag between the initial ISR mission and follow-on mop-up attacks in December 2017 and January 2018 is of the order of 24 hours. With the kind of mobility available to insurgents, this time is adequate to relocate safely, thus staying ahead of the ISR cycle. Operational necessity is to shrink the sensor-to-shooter time.

To upgrade its ISR capabilities, NAF is looking intently at UAVs. These provide an optimal low cost and safe solution for long duration, repetitive missions. A benign air defence environment makes a perfect backdrop for UAV operations. The issue however is of the availability of resources to fund this need. And the answer lies in a re-look of the operational environment and reassessing the combat equipment requirement. One deal that stands out in this regard relates to the JF-17. With practically no conventional threat on its borders, should NAF be equipping itself with the high-cost JF-17s at this juncture? Its existing fleet of F-7s is barely a decade old and adequate, along with ground-based radars, to ensure air superiority in its neighbourhood against known threats for another decade. The financial resources earmarked for the three JF-17s could optimally be utilised to upgrade the surveillance and communication network and reduce the sensor-to-shooter time for COIN operations.

Building up the capability to douse the current insurgency should ideally take precedence over the necessity to tackle a hypothetical conventional threat. Additionally, the procurement of just three JF-17s will not stand professional scrutiny with respect to its maintenance. A fighter platform like the JF-17 will necessitate the setting up of first and second lines of maintenance facilities for unhindered operations. This will tantamount to a sub-optimal utilisation of the investment in the project for just three platforms. In the absence of these facilities, the aircraft will be non-operational for a prolonged duration owing to the scheduled maintenance servicing. Either way, the cost of operation of the three JF-17s will further bloat the already burgeoning revenue expenditure. That will, in fact, prevent further modernisation. [Editor’s note – Nigeria may buy more JF-17s at a later date, and may have only budgeted for an initial three, with more funding possibly allocated later.]

Governments all over the world can allocate only finite resources for their armed forces. It is incumbent on the armed forces to assess the operational environment in a realistic manner and then draw out an appropriate equipment procurement strategy. Assets to tackle the existing security challenges must be provided for and only thereafter capabilities for tackling future threats should be built up. Unless reprioritised, the Nigerian defence budget will come under severe strain in the next three years.