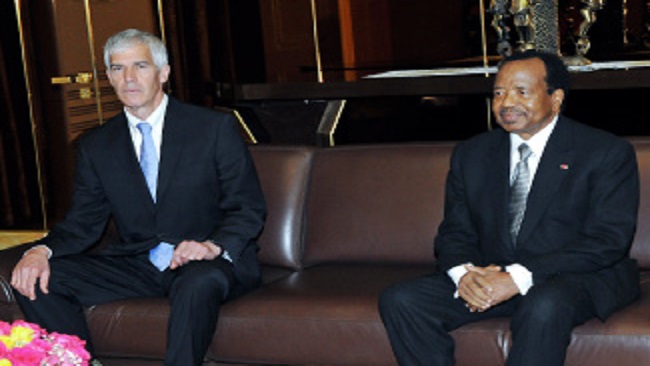 Since the end of 2016, Cameroonian citizens in the country’s English-speaking regions have been calling for more equitable representation in government and more respect for English—one of the country’s two official languages—in courts and schools. English has been increasingly marginalized, creating a society where knowledge of French is a necessity to attend the country’s top schools, receive government appointments, or conduct business.

Anglophones are also protesting the fact that more government resources are allocated to Francophone regions. In 2017, the two Anglophone regions were allocated a combined $153 million of the country’s Public Investment Budget, while the country’s south—the home region of President Paul Biya, who has been in power for more than three decades—was allocated more than $225 million, despite having a far smaller population, according to 2012 data.

What began as peaceful protests by lawyers, teachers, and everyday citizens has devolved into a near-civil war.

The hands of those fighting back are certainly not clean—there are credible reports of ambushes on military and police officers, kidnapping of local officials, and extortion of businesses for financial support—but what has allegedly happened at the hands of Cameroon’s most elite military force, and members of the country’s other armed forces, is far more alarming.

Hard reporting has been difficult to come by and sporadic given the government’s grip on power and its tendency to cut off internet access in Anglophone regions for prolonged periods—150 days in 2017 alone.

But for months, there have been widely circulated videos of individuals in military uniforms—both those of the Cameroonian army and those of the government’s elite military guard, the Battalion d’Intervention Rapide (BIR)—committing a vast array of violent acts against civilians, including burning dozens of villages in Anglophone regions, torture, and indiscriminate killing.

In one video, men in military fatigues can be seen setting village houses ablaze before walking away to let them burn to the ground.

In one video, men in military fatigues can be seen setting village houses ablaze before walking away to let them burn to the ground.

Another shows individuals in BIR uniforms beating a man with a two-by-four. And in July, videos surfaced showing military officers executing women and children.

After initial cries of “fake news,” the government ultimately acknowledged its veracity. Sadly, these are not anecdotes; there is a vast library of documented atrocities—and with presidential elections less than a month away, the violence is likely to get worse.

The conflict in Cameroon’s English-speaking regions is rooted in the country’s colonial past and path to independence, and it cannot necessarily be resolved by outside powers. But the U.S. government could put a unique type of pressure on Cameroon’s leaders simply by enforcing U.S. laws already on the books.

The so-called Leahy Law, passed in 1997 and named for its chief advocate, Democratic Sen. Patrick Leahy, essentially bars the Departments of State and Defense from providing military assistance to foreign security forces that have credible accusations of human rights violations made against them. From a growing number of press reports, firsthand accounts, and on-the-ground videos, it’s clear that the BIR and the military more broadly are violating Cameroonians’ human rights.

From a growing number of press reports, firsthand accounts, and on-the-ground videos, it’s clear that the BIR and the military more broadly are violating Cameroonians’ human rights.

These are exactly the types of forces the Leahy Law was designed to target. The BIR has always been a bit of an outlier when compared with its counterparts from other branches of the armed forces: It’s well funded, receives training from the United States, and is led by a retired Israeli military officer. The BIR doesn’t even report to the country’s defense minister, taking orders instead directly from Biya.
Source: Foreignpolicy.com