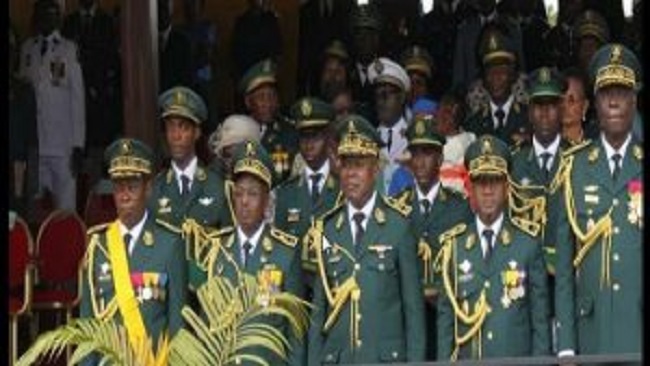 The war in Southern Cameroons has devastated its economy: But Cameroon army generals have found ways to get rich 0

The services industry is no longer booming in Southern Cameroons. However in many neighbourhoods in the old city of Buea, a dozen bars with strong ties to the Cameroon government army still open. Every day they are packed with secret servicemen and women including informants enjoying a few drinks with their food interrupted sometimes by gun fire between Ambazonian freedom fighters and soldiers loyal to the regime in Yaoundé. Less than a kilometer away precisely in Muea, Ambazonia Self-Defense Council Restoration Forces are fighting Cameroon government troops in a war that will determine the future of the Federal Republic of Ambazonia.

On first glance the Ambazonian capital city of Buea appears isolated from the conflict currently engulfing much of Southern Cameroons but it is that very conflict that enables this illusion of normalcy. Southern Cameroons is enduring its second year of crisis, and most people living in the Francophone government-controlled areas like Buea and Limbe continue to suffer from a crippling economic crisis likely to linger long after the guns fall silent.  By the end of this year, the economy of the two Cameroons will have shrunk 10-fold. President Biya is aware.

Senior economic reporters have opined that there simply isn’t much coming into or going out of Southern Cameroons. The destruction of some 97 Southern Cameroons farming communities centered in the Southern Zone have led to an almost 90 percent decrease in food production. The regime in Yaoundé in indeed confused. To adapt to this new reality, many Southern Cameroonians are implementing desperate measures: selling their property, taking on mean jobs or even stealing.

A group of persons have however created opportunity amid the chaos and like experienced war profiteers they have carved out a thriving black market. They are the top officials of the Cameroon government military headed by Defense Minister Joseph Beti Assomo. To be sure, the same Cameroon army illicit trade that was introduced in the Central African Republic under the late General Tumenta has been established in Ambazonia by the oligarchs and by amassing huge profit and power, they’ve come to exact an immense degree of control over the lives of Southern Cameroonians living in the Francophone government-controlled areas.

The rise of these French Cameroun oligarchs began soon after President Biya declared war against the people of Southern Cameroons. Joseph Beti Assomo, launched the military campaign with the aim of suffocating the Southern Cameroons economy, sundering its access to essential goods like medications and blocking internet services and bank transfers. Beti Assomo and Ousmanou Mey who headed the ministry of finance successfully set off a destructive ripple throughout Southern Cameroons that further distorted an economy that had been ravaged by ghost town operations and the escalating conflict.

These Cameroon government oligarchs’ distortions have hit everything in Southern Cameroons from the farming sector to the salaries of ordinary people. Southern Cameroonians only means of survival now is remittances from relatives abroad. Many now travel to Douala or Dschang to pick up their money for fear of being libeled a separatist. Senior officers in the army have registered taxis under the controversial Mayor Ekema Patrick and have deployed their relatives as cab drivers in Buea and Limbe with state protection. The French Cameroun army has identified its own hotels in Buea and Limbe and that’s where those with the cash are accommodated. Southern Cameroons has become the cave of gold, and every Cameroon military official wants to be Ali Baba. All French Cameroun military checkpoints are now generating huge profits for those officers in charge. Some officers demand petty bribes in exchange for use of the military vehicles usually reserved for deployments, to bypass the long queues on the Buea-Kumba highway. Bamileke businessmen pay bribes to allow their trucks, heavy with goods, to pass through quicker.

Many of the army colonels have established some kind of private security companies using heavily armed soldiers deployed to Southern Cameroons, which provide armed escorts. Banks and other businesses end up having to hire them as escorts through the rural areas. According to a Cameroon government source familiar with these oligarchs, the armed escorts does not engage with the Ambazonian fighters but they prevent them from extorting money from those convoys or even looting them.

Another popular method of profiting off the war in Southern Cameroons is looting and selling back to the people of Southern Cameroons. Four months ago, the army confiscated motor bikes in Mamfe town and stole a sea of TV and radio sets that were later sold back to the owners. When government soldiers stormed Menji and Azi in Lebialem, entire window and door frames were removed, and all the furniture and appliances inside people’s houses were taken.  Several commanders and highly placed Cameroon government officials with links to the army have developed reputations for accumulating enormous fortunes. As I write, General Elokobi Daniel Njock is equipping and at the same time building an expensive fence on his home in the Manyu County. Joseph Beti Assomo is now a billionaire par excellence. The story is same for General Melingui Nouma and his acolytes.

Frankly speaking the profits made from the underground wartime economy in Southern Cameroons by defense bosses are likely to provide more of an incentive to allow the war to continue than encourage it to stop, which will only further widen the divide between French Cameroun and Southern Cameroons.  It is precisely this war economy that is driving the war.