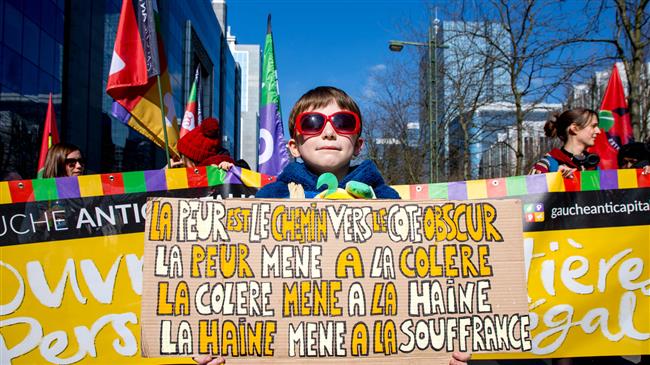 Around four thousand people have rallied in the Belgian capital to denounce racism and discrimination and demand equality for all.

The Saturday rally was organized by social groups and left-wing parties in Brussels where participants marched five kilometers (three miles) through the city.

They held up signs reading, “United against racism” and “together against discrimination.”

“I am here today to demonstrate against racism in Belgium and in the world, against the Federal Government that takes racist measures against refugees,” said one protester.

Meanwhile, 16 anti-racism and migrant support organizations hailing from the country’s Brussels, Flanders, and Wallonia regions issued a joint statement, commemorating the “victims of hatred and terror in Brussels and elsewhere.”

The government has tightened migration laws since Daesh’s bombings of the Zaventem airport and Maelbeek metro station in Brussels two years ago, which left 32 people dead and hundreds more wounded.

In their statement on Saturday, the protesters said they will not allow “terrorists” to create division within the Belgian society.

Europe has been the scene of rallies especially since 2015, when the continent was hit by an influx of refugees, mostly fleeing violence in the Middle East.

Countries across Europe have seen a significant rise in xenophobia and anti-immigrant sentiments, mostly toward Muslims. Amnesty International has sounded the alarm about right-wing parties in Europe advocating anti-immigration and anti-Islam policies.

Last year alone, extremists in Germany which is home to some three to four million Turks launched 950 attacks against Muslims, including many arson attacks targeting mosques.