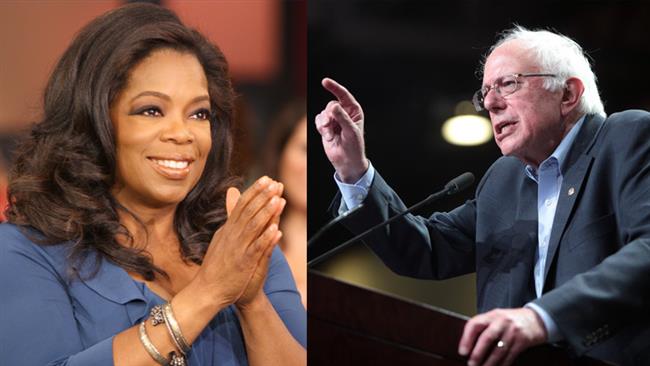 US President Donald Trump believes he could easily defeat Senator Bernie Sanders (I-Vt.) if he challenged him in 2020, according to a new report, but his allies say Trump should be more concerned about a bid from Oprah Winfrey or Joe Biden.

Politico reported Monday that Trump has been speculating with aides and other Republicans about his potential Democratic challengers for the presidency, but has dismissed Sanders as a viable candidate.

Sanders wasn’t a serious threat and would be easy to beat, Trump reportedly told a Republican with close ties to the White House.

Trump’s aides have told him that he should be more worried about a bid from media icon and philanthropist Winfrey or former Vice President Biden.

“What we can’t let voters do is think they can get the same policies with someone they like better, like Joe Biden — someone who would fight for them but who doesn’t have the crass edge,” one former White House staffer told Politico.

“I hope CNN has [New York Senator] Kirsten Gillibrand on every minute of every day. Love it. Bring it. She’s easy to destroy. If you’re the president, or the RNC [Republican National Committee], you’re more worried about someone who looks like Biden — someone who has more mainstream appeal, who blue-collar workers could identify with.”

According to a New York Times report, Trump has predicted that Sanders would run against him in 2020 even if the senator was “in a wheelchair.”

Sanders ran as a Democrat in 2016 but lost the Democratic Party’s nomination to Clinton.

Trump won the November 8, 2016 presidential election because Democrats rigged the system to have Clinton beat Sanders, according to WikiLeaks.

According to some polls, Sanders would have defeated Trump by a large margin if he had been the Democratic presidential nominee instead of Clinton.

Sanders could have won the election but the Democratic National Committee (DNC) stopped him from doing so by pushing him out from the primary race, the whistleblowing agency said.

WikiLeaks claimed that the Democratic Party establishment conspired to ensure Clinton win the party’s presidential nomination. In doing so it chose a weaker candidate who lost the election against Trump, the agency suggested.

Although Sanders has not decided whether or not to run for the 2020 presidential election, but his recent moves appear to represent a natural next step for running.

Meanwhile, there have been speculations of Oprah Winfrey planning to challenge Trump in 2020 following a passionate speech she gave at the Golden Globes on the subject of sexual misconduct.

“Oprah would be a problem: she’d be their best,” one GOP strategist said. “She’s ubiquitous, she’s black, she has crossover appeal and she probably clears a lot of the field out.”

A new poll from conservative-leaning pollster Rasmussen shows that Winfrey would beat Trump by 10 points in a hypothetical 2020 match-up.

In November last year, Biden also indicated that he may challenge Trump in 2020. He made the remarks in an interview with NBC News while promoting his new book, Promise Me, Dad: A Year of Hope, Hardship, and Purpose.

According to a Politico/Morning Consult poll, Biden also leads Trump by 11 points in a potential 2020 matchup.

Biden is a strong critic of Trump and his leadership style. He has accused his administration of misunderstanding and misrepresenting the American values.

Biden has called Trump a “charlatan,” and accused the Republican head of state of taking advantage of frustrated middle class voters.

It seems Biden is remorseful about his decision not to run in the 2016 presidential election, and has claimed that he could have easily defeated Trump.

Biden, a favorite for the 2016 Democratic nomination, announced his decision to not run for the White House in October 2015, cementing Clinton’s standing as the front-runner.