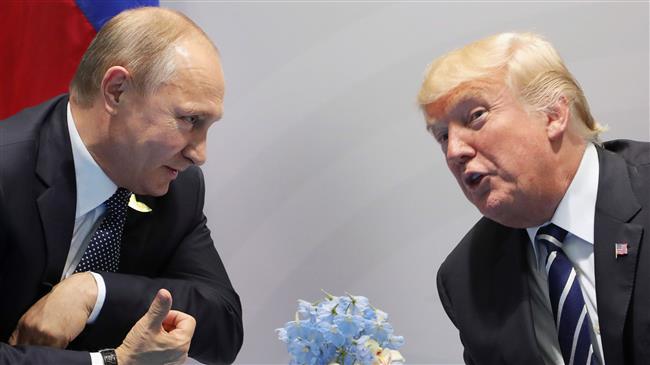 President Donald Trump says he could have “a very good relationship” with Russian leader Vladimir Putin, even as the United States and many European nations have expelled more than 150 Russian diplomats.

“Getting along with Russia is a good thing,” Trump said Tuesday during a joint press conference with leaders of three Baltic countries most concerned about the potential for “aggression” from Moscow.

“I think I could have a very good relationship with Russia and with President Putin, and if I did, that would be a great thing. And there’s also a great possibility that that won’t happen. Who knows?”

Trump made the comments as his administration raised the prospect of a White House meeting between the US and Russian presidents.

White House press secretary Sarah Huckabee Sanders said Trump and Putin had “discussed a bilateral meeting in the ‘not-too-distant future’” during their most recent phone conversation last month, and that the White House was among “a number of potential venues.”

Trump called Putin on March 20 to congratulate him on his reelection, stoking criticism he is overly warm with the Russian president even as the US intelligence has conduced Russia interfered in the 2016 US election.

During the White House summit on Tuesday, Trump said he was looking to expand business ties with Latvia, Lithuania and Estonia, as their leaders have called on the US to take a tougher stance against Russia.

“The Baltic countries remain a key market for US aircraft, automobiles, machinery and medical equipment, and we welcome increased bilateral trade with all three nations based on the principle of fairness and reciprocity,” he said.

Trump told the foreign leaders that “nobody has been tougher on Russia” than he has been, noting he has pushed for increased military spending and energy production to beat Russia.

“We’re essentially now energy-independent. We’re an exporter of energy. That is not a positive for Russia,” he said.

“We are going to have a military stronger than we’ve ever had before by far,” he added. “That’s not exactly a great thing for Russia.”

The three states, along with the US, moved to impose new sanctions on Moscow in response to the poisoning of ex-spy Sergei Skripal and his daughter in England last month, an attack that Western officials have blamed on the Kremlin.

The UK says the nerve agent Novichok had been used to poison the pair, claiming only Russia had the capability, motive and intent to be behind the attack.

Moscow has vehemently denied any involvement, saying the substance could have originated from the countries studying Novichok, including the UK itself, Slovakia, the Czech Republic and Sweden.

The Trump administration announced plans to expel 60 Russian diplomatic officials it accused of being spies following the nerve agent attack against Skripal.

Despite diplomatic actions by his administration, Trump has not forcefully condemned Putin and Moscow for the incident.