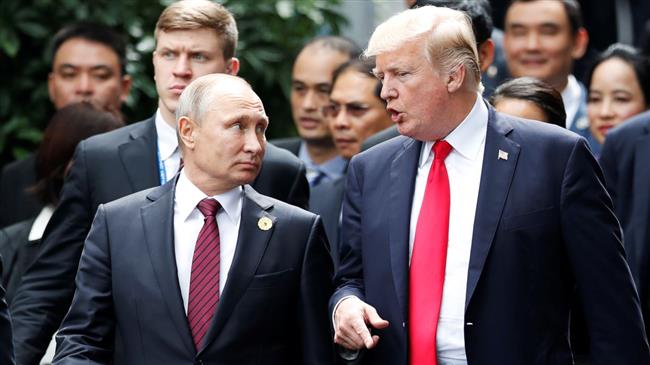 Trump to Putin: Start arms race, US will win 0

US President Donald Trump has reportedly told Russian President Vladimir Putin that if Washington and Moscow reignite the arms race, the United States would win it.

Putin’s revelation of new nuclear-capable Russian weapons that can reach the United States “really got under the president’s skin,” one official told NBC News on Thursday.

“If you want to have an arms race we can do that, but I’ll win,” Trump reportedly told his Russian counterpart during a phone call last week.

Delivering his annual state of the nation speech in Moscow earlier this month, Putin expressed concerns about the new US nuclear posture which he said has lowered the threshold for the use of nuclear weapons.

The new American policy allows the use of nuclear weapons “in response to a conventional attack or even a cyberthreat,” the Russian president said, adding, “Russia reserves the right to use nuclear weapons only in response to a nuclear attack or an attack with other weapons of mass destruction against her or her allies, or a conventional attack against us that threatens the very existence of the state.”

Putin also said that Russia had tested a number of new advanced strategic weapons, which could not be intercepted, saying they would render US-made defense missile systems “useless.”  He also said that the West has ignored Russia but should “listen to us now.”

Following the phone call, Trump said that the two men had “a very good call” and that he was planning to meet with the Russian leader in the near future.

Tensions between Russia and the US have heightened in recent weeks, following the alleged nerve-agent poisoning of a former Russian double agent in Britain.

Western officials have blamed that attack on Moscow, though the Russian government has denied any role in it. Some analysts have said that the poisoning Sergei Skripal is a false flag operation orchestrated by MI5 with the complicity of the British press in order to demonize Russia.

The US has ordered the expulsion of 60 Russian diplomats in response to the poisoning. Up to 17 EU countries and Australia have also announced that they will expel dozens of Russian diplomats.

It was the biggest such expulsion since the height of the Cold War era, a term that describes the tense relationship between the US and the Soviet Union from 1945 to 1989.

There are now fears of a serious diplomatic crisis and a freezing in relations between Moscow and the West, which has raised the specter of the Cold War once again.

American officials said the expulsions meant to send a message to Putin about the “unacceptably high” number of Russian intelligence operatives in America.

Russia’s Foreign Ministry said in a statement that “powerful forces” in the US and Britain were behind the nerve agent attack against Skripal that the British government has blamed on Moscow.

Meanwhile, UN Secretary General Antonio Guterres has warned of a return to the Cold War-like tensions between the United States and Russia in the wake of recent developments.

“I think we are coming to a situation that is similar, to a large extent, to what we lived during the Cold War,” Guterres told reporters at the UN headquarters in New York on Thursday.

He then called on Washington and Moscow to re-establish lines of communication in a bid to avoid any escalation of tensions.