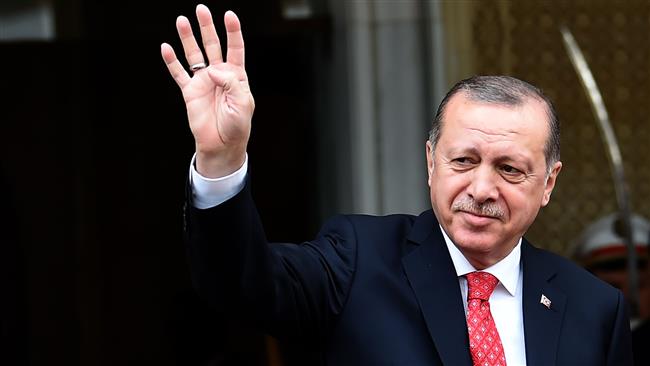 Turkish President Recep Tayyip Erdogan is to visit France this week for talks with his French counterpart, Emmanuel Macron, to explore an improvement of ties with the European Union and discuss regional issues.

The two will meet at the Elysee Palace in Paris on Friday, with talks expected to cover a range of issues from bilateral and Turkish-EU ties and trade to the developments in Syria and Palestine.

Macron reportedly intends to raise the issue of the human rights situation in Turkey. Key EU member states have engaged in quarrels with Ankara during the past year and a half over Turkey’s crackdown on perceived putschists after a failed coup in July 2016.

Earlier in the week, Macron’s office released a statement on the upcoming visit, saying that the meeting between the two would be a follow-up to “regular conversations of recent months” and would include “a particular focus on the Syrian file” as well as Palestine.

Turkey has been involved in a peace initiative for Syria with Iran and Russia in Kazakhstan’s capital of Astana. Another peace initiative, on the auspices of the United Nations, has been ongoing in Geneva. Some Western countries want the focus to be on the Geneva peace talks and away from the Astana negotiations, which has progressed comparatively better.

Separately, Erdogan’s spokesman Ibrahim Kalin has described France as a “leading ally” ahead of the visit and expressed optimism that the upcoming talks would further boost their relationship.

Two EU member states, namely Germany and Austria, have had the most strained relationship with Turkey. Berlin and Vienna have most strongly criticized the large-scale crackdown following the abortive coup in Turkey. Austria has even called for an end to EU accession talks with the Turkish government.

Macron of France has, in contrast, underlined the need to “avoid ruptures” with Turkey, which he has described as an “essential partner.” Turkey is a NATO member state.

Erdogan recently praised Macron — as well as the German leadership — for supporting Muslim nations in denouncing a decision by the US to declare Jerusalem al-Quds as the “capital” of Israel.

“They (the French) did not leave us by ourselves on this issue (Jerusalem al-Quds),” Erdogan said last week.