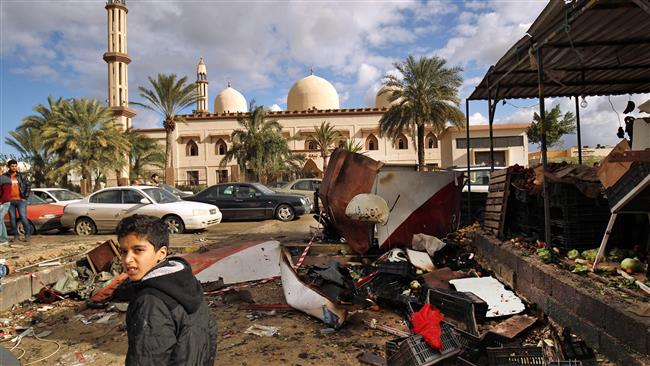 Twin car bombings outside a mosque have claimed the lives of more than 30 people and wounded dozens more in Libya’s second city Benghazi.

Security officials said on Wednesday that the bombers blew up two cars 30 minutes apart outside the mosque after evening prayers on Tuesday in the central neighborhood of al-Sleimani.

Emergency and security workers who had rushed to the scene were among those killed in the second blast.

Health officials said many of the wounded were in critical condition and the death toll was likely to rise.

Benghazi has been relatively calm since military strongman Haftar announced the eastern city’s “liberation” from militants in July last year after a three-year campaign.

Haftar, who supports an administration based in the east of the country has declared three days of mourning following the attack. Haftar’s opponents accuse him of wanting to seize power and establish a military dictatorship.

A UN-backed unity government based in the capital Tripoli, the Government of National Accord (GNA) condemned the attack as a “terrorist and cowardly act.” The GNA has struggled to assert its authority outside the west.

The UN Support Mission in Libya (UNSMIL) strongly denounced the bombings as “horrific” and warned that “direct or indiscriminate attacks against civilians… constitute war crimes.”

The UN-backed government of Libya has yet to exert its control over much of the oil-rich North African country as a rival administration in the east and its powerful army continue to challenge Tripoli’s rule as they rely on support from some of Libya’s neighbors and certain rich Arab states.

Libya has been wracked by violence and divisions since dictator Muammar Gaddafi was toppled and killed in a 2011 NATO-backed military invasion.

A series of fierce clashes between rival militias at Tripoli’s airport last week left 20 dead and forced the cancellation of all flights for five days.