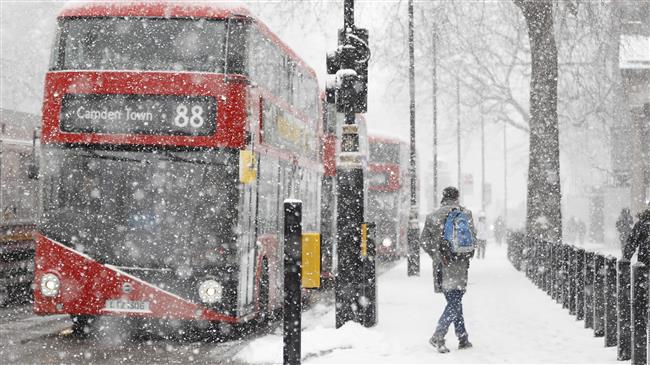 UK running out of gas amid new cold wave 0

The UK’s National Grid says it needs to buy gas in order to meet the demand amid severe drops in temperature and gas supply outages due that have raised consumption levels to a five-year high.

The NG requested shippers on Thursday to post offers on the OCM locational market after wholesale gas prices soared 74 percent within a day.

Earlier, the company issued another warning after forecast for the day initially showed a shortfall of 49.5 million cubic meters below the country’s projected need of 395.7mcm per day.

According to the Guardian, the deficit had been narrowed down to 35.2mcm.

“We are in communication with industry partners and are closely monitoring the situation,” the NG said.

Widespread snow and unprecedentedly cold temperatures following the arrival of the “Beast from the East” polar vortex and Storm Emma have forced people across the UK to fire up their heating.

The situation has been further affected by several outages in the supply line, which has proven vulnerable to very cold weather over the past.

So far, problems have been have been reported at a pipeline to the Netherlands, while there has been reduction in gas flows from Norway.

Technical issues have also been plaguing main gas facilities in the UK, including the North Morecambe Barrow terminal.

Last year, a “perfect storm” of energy supply crisis forced Britian import gas from Russia, despite London’s role in a series of strict sanctions that were supposed to cripple the Russian energy industry.