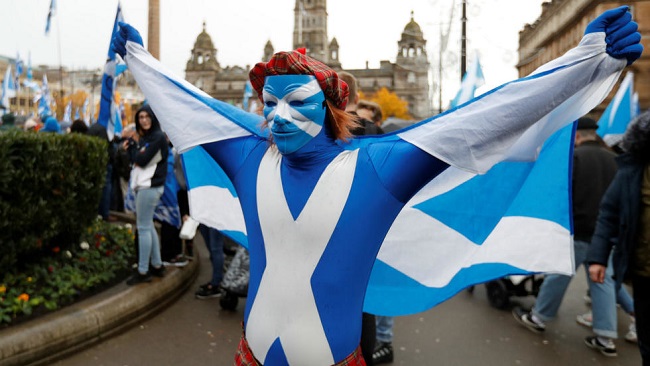 Thousands rallied in Glasgow on Saturday calling for Scotland to become an independent country, with First Minister Nicola Sturgeon telling the crowds that their goal was “within touching distance”.

The Scottish National Party (SNP) leader was the headline speaker at the event in George Square, the first time she has addressed an independence rally since the 2014 referendum campaign, with a crucial general election looming next month.

“Make no mistake, the general election we face now on December 12 is the most important election for Scotland in our lifetimes,” she told the crowds.

“The future of our country is on the line.

“We must come out in our numbers and vote in this election,” she added, insisting that the “prize” of independence was “within touching distance.”

“We must seize that prize,” she urged.

Sturgeon is expected, before Christmas, to formally ask Johnson for a Section 30 order, which would give Scotland’s devolved government permission to stage a referendum.

Supporters waved the St Andrews cross emblazoned with the word “Yes” and Catalan flags in solidarity with the fellow independence campaign.

Others wore kilts and played bagpipes, including one musician who had flames leaping from his instrument.Scotland voted against independence in a 2014 referendum by 55 percent.

But nationalists argue that the 2016 British referendum in favour of Brexit means another independence referendum is necessary — because Scotland voted by 62 percent to stay in the European Union.

Nationalists also argue that some people voted against independence thinking it would guarantee their place inside the EU.

Sturgeon promised supporters on Saturday to “lead you to an independence reference next year”.