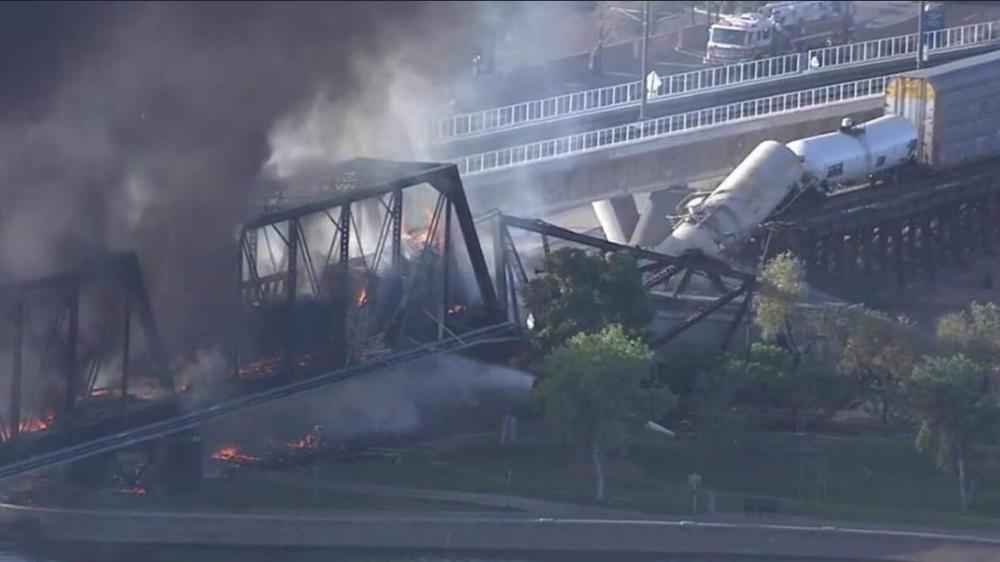 A bridge over a lake in Arizona partially collapsed on Wednesday after a freight train derailed and caught fire.

The incident happened just before 6:30 a.m. local time in Tempe, located east of Phoenix. The Tempe Police Department said on Twitter that officers and the Tempe Fire Department were on the scene of a train derailment and “large fire” over Tempe Town Lake.

“Several roads are restricted near Tempe Town Lake and west of downtown Tempe,” the department said. “Please avoid the area.”

Fire and smoke could be seen along the length of the train bridge, including a portion that collapsed in a park area.

Aerial images from FOX10 showed the fire continuing to burn as first responders arrived at the scene.

It’s not clear what the train was carrying, but lumber could be seen in the water below.

Camille Kimball, who was riding her bike under the bridge before it collapsed, told CBS 5 the noise of the train got extremely loud and as she came off the bridge.

“I turned around to look and got the fright of my life,” she told the television station. “Now there’s fire pouring into the lake from the middle of the bridge. … It’ looks like a scene from hell, truly. A scene from hell. … The flames are intense and the sky is filled with black smoke.”

It’s not yet known if any injuries have been reported due to the derailment and subsequent fire.

Valley Metro, who operates the light rail system in the Phoenix area, said due to the incident involving the freight train, Valley Metro trains were prevented from crossing the Tempe Town Lake Bridge.

Buses were being arranged to transport passengers through the area.