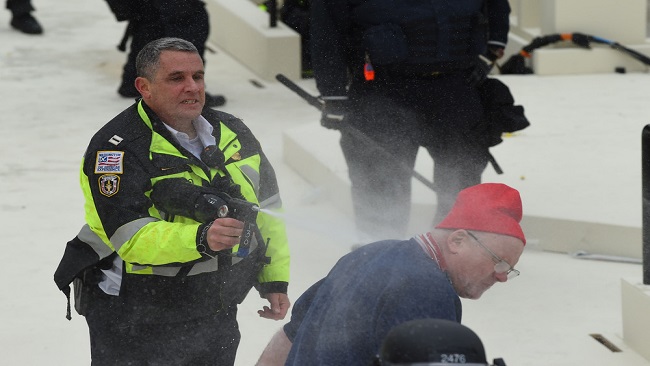 US: Biden and then Trump call for US Capitol “insurrection” to stop 0

Angry supporters of President Donald Trump stormed the US Capitol Wednesday, marching through the building, shouting and waving both Trump and American flags, and forcing a halt to congressional deliberations over challenges to Joe Biden’s Electoral College victory. Senators were evacuated and some House lawmakers tweeted they were sheltering in place in their offices.

US President-elect Joe Biden called on Trump to go on national TV to denounce the “insurrection”, calling the scenes at the Capitol “disgraceful”, that they should “stop now”.

Trump supporters fought with Capitol Police and then forced their way into the building, not long after a rally near the White House, during which Trump had egged them on, saying: “We will never give up, we will never concede … We will stop the steal.”

Multiple police officers have been injured at the Capitol and the National Guard has been mobilised to provide support.

Vice President Pence has called for the violence to ‘stop now’ – but outgoing president Trump has not.

The violence at the Capitol came as Congress sat to certify the election victory of Joe Biden.