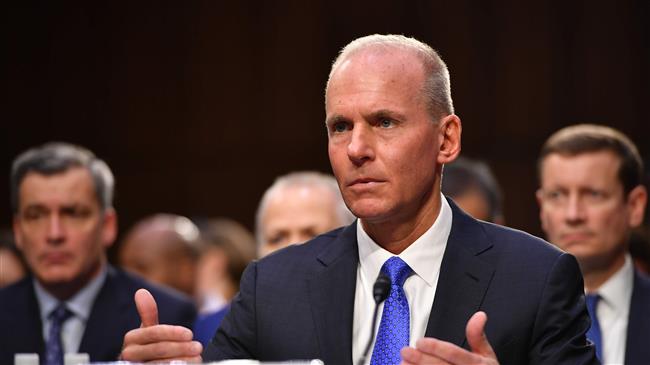 US aerospace company Boeing has fired Chief Executive Officer Dennis Muilenburg, following a year of intense scrutiny and industrial setbacks set off by twin fatal crashes of its 737 MAX jetliner.

The management shakeup comes as the world’s largest planemaker struggles to win regulatory approvals for its grounded best-selling jetliner while trying to regain trust with passengers and airline customers.

Boeing’s chairman David Calhoun will take over as CEO and president, effective January 13, the company said Monday, adding that a change in leadership was necessary to restore confidence in the company.

The 737 MAX grounding was the biggest crisis of Muilenburg’s 34-year tenure at Boeing, where he started as an intern in 1985, rising through the company’s defense and services ranks to the top job in 2015.

The company said this month it would stop production of the 737 Max in January after the head of the Federal Aviation Administration (FAA) said Boeing was pushing for an unrealistically quick return of the grounded jets.

A senior industry source called the wording of Boeing’s statement “brutal”. Another said the decision was inevitable after spiraling pressures from the 737 production halt to a public slap-down from the FAA, topped off by an embarrassing space launch snafu on Friday.

Speculation that Muilenburg would be fired had been circulating in the industry for months, intensifying in October when the board stripped him of his chairman title.

A Boeing official said the board deliberated over the weekend and they made the decision to fire Muilenburg in a phone call on Sunday.

In keeping Muilenburg in the job as long as Boeing has, the company was ignoring elements of the classic crisis communications playbook used by other companies, said Paul Argenti, a professor at Dartmouth’s Tuck School of Business.

“You want to bring somebody from the outside to bring fresh perspective to ‘save the day,’” Argenti said. “He should have been gone a long time ago. He is part of the problem.”

The 737 Max was grounded worldwide after two crashes — one in October 2018 off the cost of Indonesia and another in March 2019 in Ethiopia — which killed a combined total of 346 people.

Investigators say that in both crashes, a faulty sensor caused the plane’s MCAS system to push the nose of the plane down and pilots were unable to regain control.

“This is something that we have been asking and struggling for quite some time,” said Ababu Amha, who lost his wife, a flight attendant, in the second crash involving an Ethiopian Airlines aircraft. “The CEO reluctantly and deliberately kept the aircraft in service after the Lion Air crash. The Ethiopian Airlines crash was a preventable accident.”

The resignation, however, is not enough, Amha said. “They should further be held accountable for their actions because what they did was a crime.”