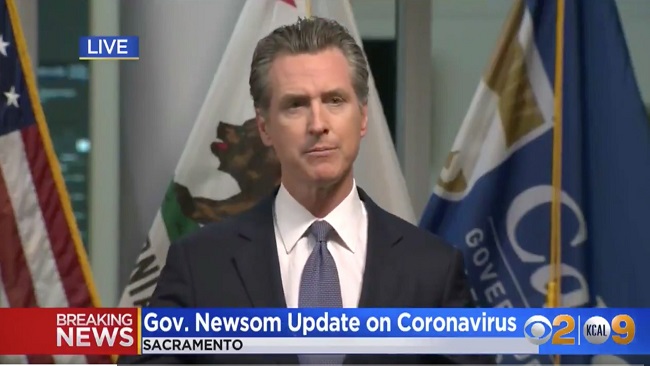 US: California governor orders entire state to stay home, says 56% of them could get coronavirus 0

California’s governor on Thursday issued an unprecedented statewide “stay at home order” directing the state’s 40 million residents to hunker down in their homes for the foreseeable future in the face of the fast-spreading coronavirus pandemic.

Governor Gavin Newsom’s directive, effective immediately, marks the largest and most sweeping government clampdown yet in the worsening public health crisis brought on by the COVID-19 outbreak, which he predicted could infect more than half the state within eight weeks.

“We are confident the people of California will abide by it, they will meet this moment,” Newsom, a Democrat in his first term as governor of the nation’s most populous state, told a late-afternoon news briefing from the state capital in Sacramento.

“They’ll step up as they have over the last number of weeks to protect themselves, to protect their families and to protect the broader community in this great state and the world we reside in,” he said.

Newsom called the order essential in light of modeling by experts that showed roughly 56 percent of the state’s residents, or 25 million people, would contract the respiratory illness in the next eight weeks. Such numbers would require nearly 20,000 more hospital beds than the state could provide.

Already more than 1,000 Californians have been confirmed as infected and 18 have died, the third largest death toll in the United States behind only Washington state and New York.

Newsom said exceptions to the stay-at-home rule would be granted for residents to make trips to grocery stores, pharmacies, doctors and laundromats, and workers in “critical infrastructure sectors.”

The governor did not give an end date for the order but suggested it would last for at least eight weeks.

Newsom was also vague about enforcement, saying he expected Californians would bend to “social pressure” on their own.

The announcement caught many in the state by surprise and drew swift criticism from U.S. House of Representatives Republican leader Kevin McCarthy, who told Fox News Channel he was unhappy the governor did not consult with lawmakers in Washington.

“We do think there was an ability to do this without shutting down the entire state. I hope he consulted with a lot of experts before he just made this decision,” McCarthy told Fox.

Newsom said during the news conference he had discussed the matter with House Speaker Nancy Pelosi, a Democrat from Northern California.

Earlier on Thursday the governor asked President Donald Trump to send a U.S. Navy hospital ship to the port of Los Angeles “immediately” as the state braces for the expected surge in the number of coronavirus cases.

Trump has said he would deploy two Navy hospital ships, one to each coast, but defense officials have said the vessels were not yet ready to take on patients.