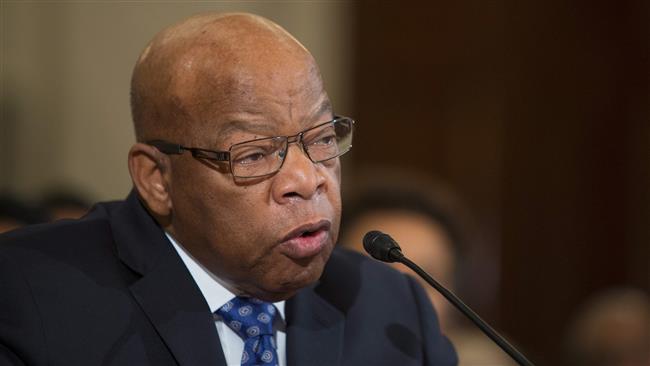 US: Congressman John Lewis says racism ‘must be in Trump’s DNA’ 0

US President Donald Trump’s use of the word “shithole” to describe Latin American and African countries suggests racism “must be in his DNA,” Congressman John Lewis says.

“I think the words and his actions tend to speak like one who knows something about being a racist,” Representative John Lewis (D-Ga.) said in an MSNBC interview on Friday.

“It must be in his DNA, in his makeup, but it’s frightening to have someone in the office of the president in 2018 speaking the way that he’s speaking,” he added.

The congressman said that Trump’s remarks were “unreal” and “unbelievable.”

“We’re one people, we’re one family, we all live in the same house,” he said. “I don’t think language like this is in keeping with the future of our country or the future of the planet.”

The lawmaker said that the comments were “incompatible” with Trump who signed a proclamation on Friday to honor civil rights leader Martin Luther King Jr.

“You cannot speak the words of tolerance and peace and love … and then put down a group of people, a nation of people because of the color of their skin or what part of the world they may come from,” Lewis said.

During a meeting at the White House on Thursday, Trump reportedly asked why “people from shithole countries come to” the United States.

His contemptuous comments, which were about immigrants from El Salvador, Haiti and African countries, have provoked severe criticism in the US and abroad.

‘Trump’s father was a Klansman’

“Trump’s father was once arrested in 1927 with a large group of Klansmen in a demonstration in New York City, which begs the question, why was he there and in that group?” stated Martin, a former congressional staffer based in Los Angeles.

“Trump’s Company, when his father was chairman and Donald was president was sued by none other than President Richard Nixon’s Justice Department for actually placing (N) or (C) on the upper right corner of rental applications of Black Applicants who sought to rent in their various Brooklyn Properties, the (N) met ‘Nigger’ and the (C) met ‘Colored’ depending on which clerk took the application. Trump stipulated and PAID the Penalty,” the analyst told Press TV on Saturday.

Martin added that once Trump “paid for full paid Ads in The New York Times calling for the hanging of 5 black teenagers who were falsely accused of attacking a white girl, they were proven innocent, yet Trump continued to pay for the Ads, never apologized and continued to personally attack the young men and to this day will not admit he was wrong.”

“When Trump’s best friend who was a confirmed New York mobster would come to the fine dining restaurant at Trump Tower, Trump ordered all the ‘niggers’ out of his (the mobster’s sight) because he knew he (the mobster) didn’t like Black people. This language used by Trump in making his instructions was confirmed by many Trump employees,” the commentator said.