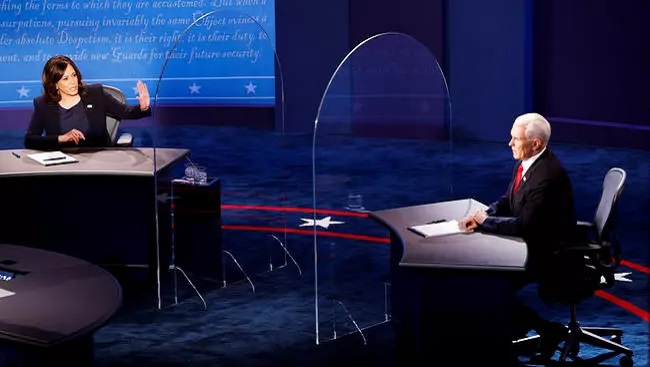 US Election 2020: Pence and Harris clash on coronavirus pandemic 0

US Vice-President Mike Pence and Democratic running mate Kamala Harris have clashed fiercely over the coronavirus pandemic in a TV debate.

Ms Harris accused President Donald Trump of “the greatest failure of any presidential administration in the history of our country”.

Mr Biden leads Mr Trump with 27 days to go to the vote.

In Wednesday night’s 90-minute debate at the University of Utah in Salt Lake City, Ms Harris was asked whether she would take an approved Covid-19 vaccine distributed ahead of the election.

The 55-year-old California senator said she would not take a vaccine touted by Mr Trump without the approval of medical professionals.

Mr Pence – a mild mannered former Indiana governor known for his steadfast loyalty to Mr Trump – retorted: “The fact that you continue to undermine public confidence in a vaccine if the vaccine emerges during the Trump administration I think is unconscionable.

“And, senator, I just ask you, stop playing politics with people’s lives.”

The plexiglass barriers separating the two debaters seated 12ft (3.6m) apart was a vivid reminder of the pandemic that has killed more than 200,000 Americans.

The president – who is himself recovering from the virus – returned to the White House on Monday evening after three nights in hospital, with his opinion poll numbers drooping.

On Wednesday he declared that catching the disease was a “blessing from God” that exposed to him to experimental treatments he vowed would become free for all Americans.