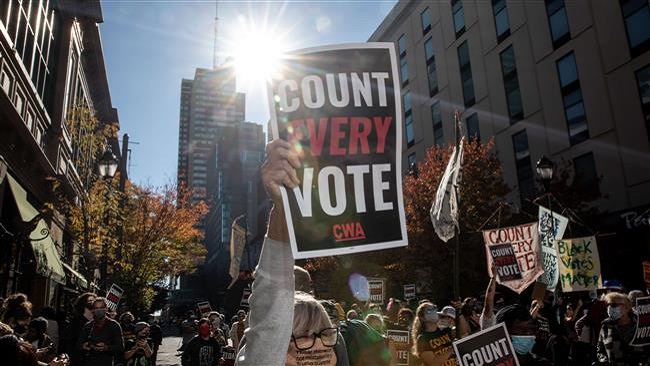 Supporters of US President Donald Trump and his Democratic challenger, Joe Biden, have again staged protest rallies in Philadelphia and other cities across the United States over the integrity of the presidential election.

The protests were held on Thursday as ballot counting dragged on in a number of states that will decide the winner of the nail-biter election, Reuters reported.

Both groups appeared outside a vote-counting center in Philadelphia, the capital of Pennsylvania, as the result of the election hung in the balance and tensions ran high.

The Trump and Biden campaigns see the state’s 20 electoral votes as essential to clinch victory. Trump is leading Biden.

Across the street Biden supporters chanted Count Every Vote. They believed that a complete tally would show the former Democratic vice president had beaten the Republican incumbent president.

“We can’t allow the ballot counters to be intimidated,” said Bob Posuney, a 70-year-old Biden-supporting retired social worker with a “count every vote” T-shirt.

In Harrisburg, a number of protesters gathered on the steps of the Pennsylvania State Capitol Building on Thursday afternoon as part of a “Stop the Steal” rally organized by Trump supporters.

Some carried Trump signs and others American flags.

“This is not a rally supporting a particular candidate,” conservative activist Scott Presler said at the rally. “This is a rally fighting for two things: truth and justice.”

Republican US Representative Jim Jordan of Ohio told Trump supporters that he was concerned about ballots that arrived without a clear postmark.

“The administration wants to count every legal vote, every legitimate ballot,” Jordan said in an interview. “This is the closest election we’ve maybe ever had. You don’t want ballots that arrived after the Election Day with an indistinguishable postmark.”

On Wednesday, a few demonstrations led to clashes with police with some protesters arrested.

The demonstrations were triggered in part by Trump’s comments following the Election Day. He demanded that vote counting stop and made claims about voter fraud.

Trump’s campaign lost court rulings in the battleground states of Georgia and Michigan on Thursday, but it vowed to challenge voting irregularities in Nevada, according to Reuters.

In the Georgia case, the campaign alleged that dozens of late-arriving ballots were mixed with on-time ballots. In Michigan, it had sought to stop votes from being counted.

Judge James Bass, a superior court judge in Georgia, stated that there was “no evidence” that the ballots in question were invalid. In the Michigan case, Judge Cynthia Stephens said: “I have no basis to find that there is a substantial likelihood of success on the merits.”

At a news conference in Las Vegas on Thursday,

He said a lawsuit would be filed in federal court to ask the judge to “stop the counting of improper votes.”