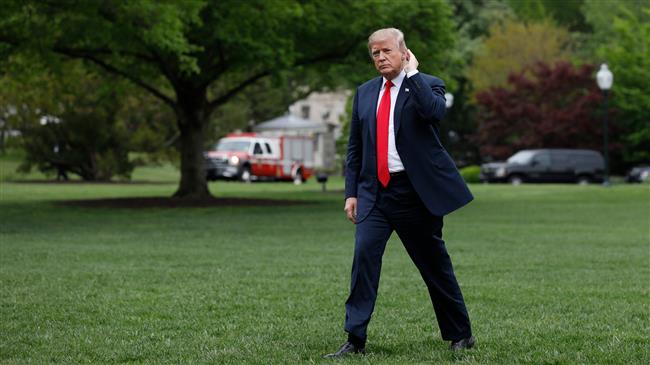 US Democratic lawmakers at the House Intelligence Committee have accused President Donald Trump of abusing his power in office in his conduct toward Ukraine.

Trump “placed his own personal and political interests above the national interests” of the US and not only “sought to undermine the integrity” presidential election process, but also endangered US national security.

In the 300-page report, the House Democrats also leveled allegations of sweeping abuse of power by Trump and said he used US military aid and the prospect of a White House visit to pressure Ukrainian President Volodymyr Zelenskiy to launch investigations into one of his political rivals in the 2020 election.

“The evidence is clear that President Trump used the power of his office to pressure Ukraine into announcing investigations into his political rival, former Vice President Joe Biden, and a debunked conspiracy theory that it was Ukraine, not Russia, that interfered in the 2016 election,” the House Democrats said. “These investigations were designed to benefit his 2020 presidential reelection campaign.”

The lawmakers argued that “damage … will be long-lasting and potentially irrevocable if the President’s ability to stonewall Congress goes unchecked.”

The US House Judiciary Committee has called Trump’s refusal to participate in an impeachment hearing “unfortunate” and said that it is a sign that Trump has something to hide.

US Congressman Adam Schiff, the chairman of the House Intelligence Committee leading an impeachment inquiry into Trump, said in a news conference after the release of the report that evidence for impeaching Trump was overwhelming.

Schiff declined to say whether he believes Trump should be removed from office, but he issued a stark warning about the danger of keeping a president with no boundaries in office.

The report serves as the backbone of the Democrats’ impeachment proceedings against Trump, who is accused of withholding military aid to Ukraine, to force Kiev to open a probe into his Democratic political rival Joe Biden. Trump has denied the allegation and rejected the impeachment as a witch-hunt.

The White House responded to the published report on Tuesday afternoon and denounced it as a “one-sided sham process” that found “evidence of nothing.”

“This report reflects nothing more than their frustrations. Chairman [Adam] Schiff’s report reads like the ramblings of a basement blogger straining to prove something when there is evidence of nothing,” White House Press Secretary Stephanie Grisham said.

Behind closed doors late Tuesday, the Democratic-led panel voted 13 to 9 to officially adopt and issue the report to the House Judiciary Committee, which is tasked with drafting articles of impeachment against the president.

The report is expected to form the basis for the Judiciary Committee to draw up formal charges or articles of impeachment in the coming weeks.

Opinion polls show Americans are bitterly divided over the impeachment.