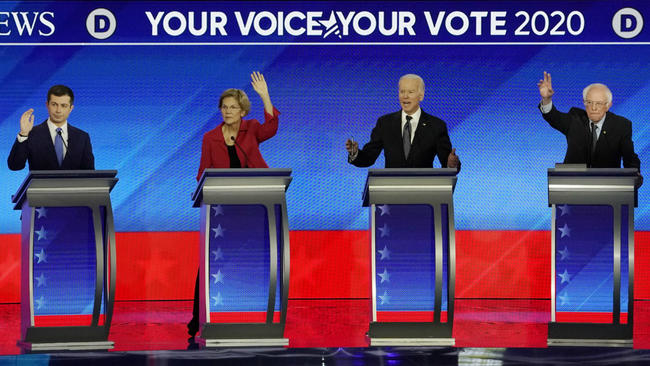 US Politics: Iowa winners, Sanders and Buttigieg come under attack in Democratic debate 0

Democratic presidential contenders Bernie Sanders and Pete Buttigieg, the top finishers in Iowa’s first nominating contest, faced a barrage of criticism on Friday from rivals who said they did not have what it takes to lead the party to victory against Republican Donald Trump.

In a heated debate in New Hampshire just four days before the state’s pivotal primary, the two came under heavy fire as their Democratic rivals questioned whether Sanders’ democratic socialist views and Buttigieg’s relative lack of experience made them too much of a risk for the Nov. 3 election.

Sanders, 78, a U.S. senator and leader of the party’s progressive wing, and Buttigieg, the 38-year-old former mayor of South Bend, Indiana, finished in a virtual dead heat in Iowa earlier this week.

Former Vice President Joe Biden, the one-time front-runner who finished a disappointing fourth in Iowa, came out swinging in his most aggressive performance yet, a sign of growing desperation as he looks to rebound.

He said Trump would have an easy time ripping into Sanders in a general election campaign.

“Bernie has labelled himself, not me, a democratic socialist. I think that’s the label that the president is going to lay on everyone running with Bernie if he is the nominee,” Biden said.

U.S. Senator Amy Klobuchar, who finished a distant fifth in Iowa, said Sanders would not attract the kind of centrist voters needed to win.

“Donald Trump’s worst nightmare is a candidate who will bring people in from the middle,” Klobuchar said at the eighth Democratic debate. “I think we need someone to head up this ticket that actually brings people with her instead of shutting them out.”

Biden and Klobuchar also questioned whether Buttigieg had enough experience to face off with Trump. Buttigieg served two terms as mayor of South Bend, a city with a population of 100,000.

“It is easy to go after Washington, because that’s a popular thing to do,” Klobuchar said, telling Buttigieg that “it’s popular to say and makes you look like a cool newcomer.”

Buttigieg said the Washington insider experience of some of his rivals was no longer what was needed, and it was time to “turn the page” on the old Washington politics.

Billionaire activist Tom Steyer said Buttigieg has not been able to show much appeal to the black and Latino voters who are crucial to a winning Democratic campaign.

Buttigieg also came under fire for his record on race in South Bend. Asked about an increase in arrests of blacks on marijuana-related charges, he said as mayor he targeted cases “when there was gun violence and gang violence.”

Asked if Buttigieg’s answer was sufficient, U.S. Senator Elizabeth Warren said: “No. You have to own up to the facts.”

Historically, candidates who win the Iowa caucuses see a boost in New Hampshire, and two opinion polls released this week showed Buttigieg within striking distance of Sanders, who has consistently been atop the field in the state.

But with controversy surrounding the Iowa results, New Hampshire’s primary on Tuesday takes on added importance in the race for the Democratic nomination.

Biden did not seem confident about how he would do.

“This is a long race. I took a hit in Iowa, and I’ll probably take a hit here,” he said.

After the performance in Iowa, Biden’s campaign on Friday said that Anita Dunn, a longtime Democratic strategist and former White House aide to President Barack Obama, would assume a larger leadership role within the campaign.

Aides to Biden downplayed the move, noting that Dunn has been advising the campaign all along.

“This is not a reshuffling,” one aide said. “This is giving her a slightly broader portfolio.”

Sanders, who has called for a political revolution that will attract new voters, said “the way to beat Trump is by having the largest voter turnout in the history of this country.”

Notably absent from the debate was Michael Bloomberg, a billionaire former New York mayor, who is not competing in New Hampshire but has been assembling a formidable campaign operation in later voting states. Although Bloomberg has been ascending in national polls, he has been funding his own campaign and not taking donations, so he failed to meet the donations criteria for the debate.