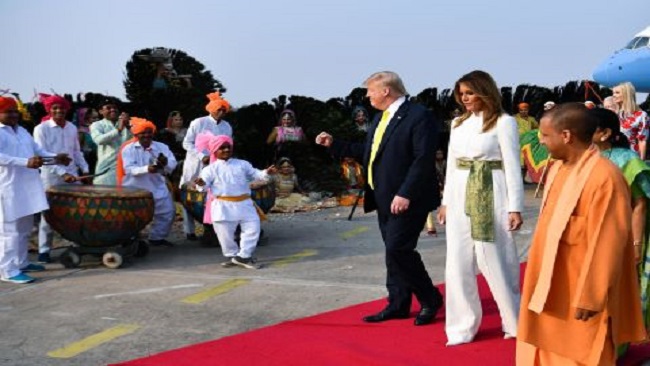 US President Donald Trump has arrived in India on his first official visit to the country amid strained relations between Washington and New Delhi over a trade dispute.

Trump landed in the western city of Ahmedabad, the hometown of Indian Prime Minister Narendra Modi, on Monday on a two-day trip which will focus on the deepening of bilateral ties.

The US president left Washington on Sunday, predicting that “many millions” would greet him on his visit with Modi.

Thousands of people lining the streets, including a parade of hundreds of dancers and musicians in colorful traditional dress, welcomed Trump with over 100,000 later waiting for him in the world’s largest cricket stadium.

Half a dozen people said Modi’s ruling Bharatiya Janata Party had offered them 200 Indian rupees ($4.21) each to be present at Trump’s rally, according to local media.

His visit comes following days of protests in the country over a new citizenship law which offers a path to Indian citizenship for religious minorities in neighboring countries, but excludes Muslims.