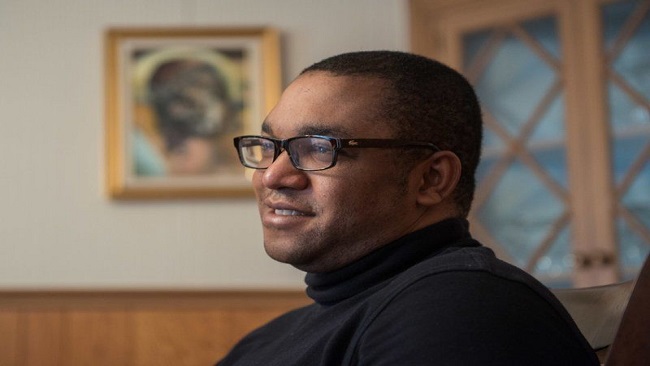 US: Priest from Cameroon bonds with parish while studying for doctorate 0

The vocation picture in Africa is very different, according to the Rev. Maurice Agbaw-Ebai, a priest from Cameroon who is assigned to St. Mary Parish in Georgetown and Rowley while he studies toward a double doctorate in theology and philosophy at Boston College. The seminary for the Diocese of Mamfe, in the South West region of Cameroon where Agbaw-Ebai was ordained in 2009, has 170 major seminarians, he said. Another seminary, in the same ecclesiastical province, has 250 major seminarians, he added.

Over in Nigeria, which borders Cameroon, Bigard Memorial Seminary claims the distinction of being the world’s largest Catholic seminary, with more than 1,000 students, Agbaw-Ebai said.

How does one explain this phenomenon?

“The church in Africa is young,” Agbaw-Ebai said. “It’s really a vibrant church.” While the Catholic Church has existed for hundreds of years in Europe – where the seminaries have pitifully low numbers – Christianity is still relatively young in much of Africa, he explained.

“We pray for vocations,” he said. And that prayer is very active, he pointed out. A faith community, he said, must “nurture” vocations to encourage more people to consider entering religious life as priests, religious brothers or sisters. “Sometimes the call is there, but somebody needs to ignite the flame,” he said.

Finding his way to the priesthood

Agbaw-Ebai said he was initially attracted to the priesthood by two things that might seem mundane: the white cassock worn by priests – and fried eggs.

“I was always struck by the white cassock,” he said. As for the eggs, he recalled playing at the mission near his home and smelling the aroma of fried eggs.

“I love fried eggs,” he said. So he figured that if he became a priest, he would often be dining on fried eggs.

This all happened, of course, when he was very young. As he grew older, he considered becoming a literature teacher or a physician.

“I love drama, especially Shakespeare,” he said. “But the desire for the priesthood was stronger.”

Agbaw-Ebai began his seminary training at age 17. He was ordained 10 years later.

After his ordination, he worked as the private secretary to the bishop of his diocese. Then he served as chancellor and financial administrator of the diocese. After serving as administrator of Holy Trinity Parish in Ekok, the bishop asked him to pursue the advanced degrees for which he is now studying.

“I am sure they got tired of me and whisked me over to Boston,” he said with a laugh.

Initially, he said, the bishop wanted him to study canon law. Agbaw-Ebai, however, preferred to study the various cultures within the church.

“Not that I do not love canon law,” he said. He pointed out that the Catholic Church is “made up of people from every tribe, tongue and people and nation.”

“Very early on, I developed a profound love for ecclesiology,” he said. “My bishop then argued that I could do canon law and specialize on the ecclesiological foundations of canon law. Finally, he let go and allowed me to settle fully for ecclesiology.”

Should Agbaw-Ebai encounter people who raise serious arguments against the existence of God or the authenticity of the Catholic faith, he will be well-equipped to defend the church’s positions.

He is studying the atheistic philosophy of Friedrich Nietzsche.

“It has always come as a surprise why a Catholic priest should be in love with Nietzsche,” he noted.

While studying the works of Joseph Ratzinger, who led the church as Pope Benedict XVI, it became clear to Agbaw-Ebai that Ratzinger, recognized as an eminent theologian long before his election to the papacy, respected Nietzsche’s thinking even though he obviously does not share the philosopher’s rejection of God.

“Today, more than ever before, we cannot take the existence of God for granted, especially in large sectors of the elite Western world. It is therefore necessary to study the inner coherence, content and logic of the thinking of not only Nietzsche, but Sartre, Voltaire, Camus, et cetera, for faith in God, if reason is to be true to its own inner methodology, cannot be irrational. The God of faith is different from positivistic divinities,” he explained.

He said he expects to complete his academic work in 2019. He will then return to Cameroon. He hopes to teach in his native country, he said. He anticipates his students will include future priests.

Asked what he likes the most about being a priest, Agbaw-Ebai did not hesitate to answer. “The Mass and the confessional,” he said. “These are moments I can never give up for anything.”

Celebrating Holy Mass, during which, according to Catholic teaching, the bread and wine become the very body and blood of Jesus Christ, is awe-inspiring and humbling, he said.

He has come to love the parishioners in Georgetown and Rowley, he said. “There are a lot of people who love Jesus and make sacrifices,” he said. “They have a great love for the church.”

He is impressed by the generosity of St. Mary’s parishioners, he said. They have organized many fundraising efforts for people in need, he noted.

Agbaw-Ebai said he would like to see the Catholic Church in the United States “open itself up to the gifts of other churches.”

To quite an extent, that’s already happening. Agbaw-Ebai is just one of many African priests who are serving or have served the Archdiocese of Boston. The North Shore has sizable numbers of immigrants from Nigeria, Cameroon, Kenya and other African countries, he noted.

The person who had the greatest influence on Agbaw-Ebai’s spiritual journey is his mother. “My Christian faith is thanks in large measure to my mother, who continues to be the woman of my life,” he said.