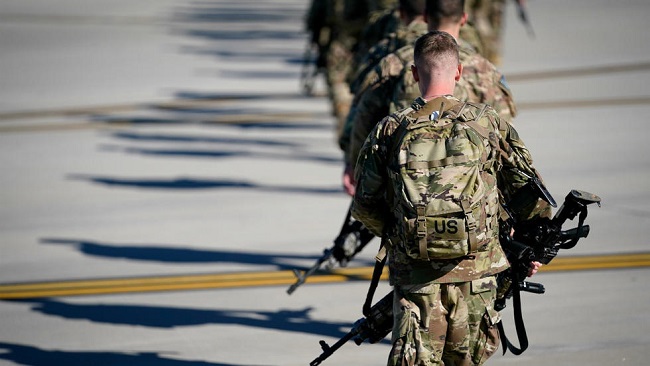 The Pentagon disclosed Friday that 34 US service members had been diagnosed with traumatic brain injury following Iran’s missile strikes on an Iraqi base earlier this month, a number higher than the military had previously announced. The revelation belies US President Donald Trump’s initial claim that no Americans were harmed in the attack.

Eight of the 34 injured arrived in the US on Friday from Germany, where they and nine others had been flown days after the January 8 missile strike on Iraq’s Ain al-Asad air base. The nine still in Germany are receiving treatment and evaluation at Landstuhl Regional Medical Center, the largest US military hospital outside the continental United States.

Jonathan Hoffman, the chief Pentagon spokesman, said the eight in the US will be treated at Walter Reed National Military Medical Center in Bethesda, Maryland, or at their home bases. The exact nature of their injuries and their service and unit affiliations were not disclosed.

Trump and other top officials initially said Iran’s retaliatory strikes for the January 3 killing of Iran’s Revolutionary Guards commander Qassem Soleimani had not killed or injured any US service members.

The military said symptoms of concussion or traumatic brain injury were not immediately reported after the strike and in some cases became known only days later. Many were in bunkers before nearly a dozen Iranian ballistic missiles exploded.

Trump: ‘I heard they had headaches’

Last week, US military officials said 11 troops had been treated and transferred out of Iraq for concussion symptoms after the attack on the Ain al-Asad base.

Responding to the disclosure while he was in Davos Wednesday, Trump appeared to dismiss the injuries.

“I heard they had headaches,” said Trump at a news conference. “I don’t consider them very serious injuries relative to other injuries I have seen.”

Senator Jack Reed, a Rhode Island Democrat and his party’s ranking member on the Armed Services Committee, called on Trump to apologise.

“TBI is a serious matter,” said Reed in a statement, referring to Traumatic Brain Injury. “It is not a ‘headache,’ and it’s plain wrong for President Trump to diminish their wounds. He may not have meant to disrespect them, but President Trump’s comments were an insult to our troops. He owes them an apology.”

“It’s plain wrong for President Trump to diminish their wounds,” Mr. Reed, who served as an officer in the 82nd Airborne Division, said in a statement Friday. “He may not have meant to disrespect them, but President Trump’s comments were an insult to our troops. He owes them an apology.”

Traumatic brain injury, or TBI, has become a bigger concern for the military in recent years as medical science improves its understanding of its causes and effects on brain function. It can involve varying degrees of impairment of thinking, memory, vision, hearing and other functions. The severity and duration of the injury can vary widely.

Renewed questions of US military policy on brain injuries

The question of US casualties took on added importance at the time of the Iranian strike because the degree of damage was seen as influencing a US decision on whether to counterattack and risk a broader war with Iran. Trump chose not to retaliate, and the Iranians then indicated their strike was sufficient for the time being.

Pentagon officials have said there had been no effort to minimise or delay information on concussive injuries, but its handling of the injuries following Tehran’s attack has renewed questions over the US military’s policy regarding how it deals with suspected brain injuries.

While the US military has to immediately report incidents threatening life, limb or eyesight, it does not have an urgent requirement to do so with suspected traumatic brain injury, or TBI, which can take time to manifest and diagnose.

Hoffman said US Defense Secretary Mark Esper had directed the Pentagon to review the process for tracking and reporting injuries.

“The goal is to be as transparent, accurate and to provide the American people and our service members with the best information,” Hoffman said.

Various health and medical groups for years have been trying to raise awareness about the seriousness of brain injuries, including concussions.

According to Pentagon data, about 408,000 service members have been diagnosed with traumatic brain injury since 2000.