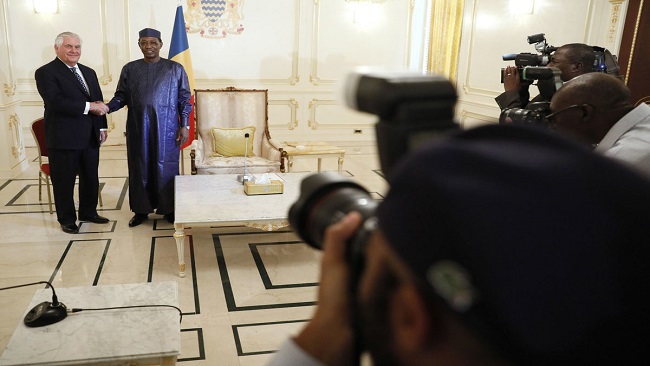 US Secretary of State Rex Tillerson said on Monday Washington was considering lifting a travel ban on Chad, offering an olive branch to a key ally in the fight against terrorist groups in West Africa.

The top US diplomat flew into the Chadian capital N’Djamena on the last day of a truncated tour of Africa with stop-offs in Kenya, Ethiopia, Djibouti and Nigeria – all front-line partners against ISIL and al-Qaeda off-shoots.

It was his first diplomatic visit to the continent where many are still smarting from US President Donald Trump’s reported dismissal of states there as “sh**hole” countries in
January. Trump later denied making the comment.

Tillerson said Chad had made important steps to strengthen control over its security and passports. “These steps I think are going to allow us to begin to normalize the travel
relationship with Chad,” he told reporters.

A report on Chad’s progress was being prepared in Washington and would be reviewed by President Trump next month, Tillerson said. “We have to wait for the final report,” he added.

Tillerson, who had met Chad’s President Idriss Deby previously while serving as CEO of ExxonMobil, said he was concerned about the presence of ISIL-allied militants in the Sahel and called Chad an “important partner.”

In September, The Trump White House added Chad – along with North Korea and Venezuela – to a list of countries whose citizens are restricted from travelling to the United States -drawing protests from Chad and others including France which works closely with the Chadian military.

Officials from the US Department of Homeland security said at the time Chad had to failed to send in proof that it had taken a number of security measures. Chad’s President Deby “expressed his incomprehension” about the ban during a meeting with Tillerson on Monday, Foreign Minister Chérif Mahamat Zene said.

Tillerson’s entourage earlier said he had been forced to cut short the African tour on Monday to return to deal with urgent work in Washington.

He is due to fly on to Nigeria after Chad, but will spend just a few hours there on Monday evening rather than the overnight visit originally planned. There was no immediate
response from Abuja.

“Due to demands in the Secretary’s schedule, he is returning to the U.S. one day early after concluding official meetings in Chad and Nigeria,” Under Secretary of State Steve Goldstein told reporters.

Tillerson, 65, cancelled some events in Kenya on Saturday, saying he was feeling unwell.