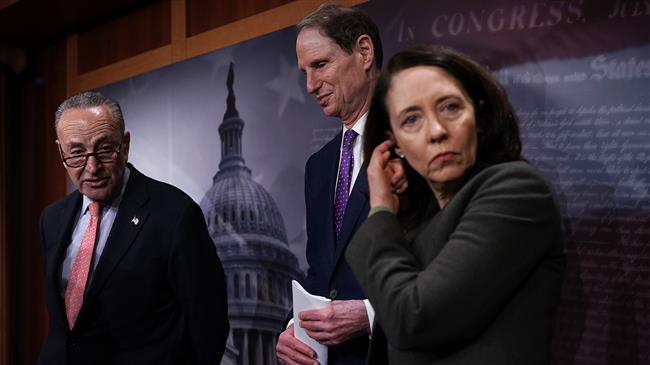 US Senate Minority Leader Chuck Schumer has said the exit of President Donald Trump’s top economic adviser, Gary Cohn, is another indication the White House is getting “hollowed out.”

“One of the problems here is the White House is getting hollowed out and the number of people capable of doing things, of doing real things whether you agree or disagree ideologically, is getting smaller and smaller. And they seem unable to recruit new people to take these jobs,” Schumer told reporters on Wednesday.

“The president’s erratic style. I didn’t vote for Jeff Sessions, but I think it’s a symbol to everybody what he did to his best friend Jeff Sessions is don’t go work there,” he said, referring to Trump’s public denunciation of his Attorney General Sessions and the Justice Department.

“And I’ve heard story after story of capable people in the Gary Cohn mode trying to be recruited by the White House and no one wants to go,” he continued.

Cohn announced his resignation from the Trump administration on Tuesday, days after the president announced that his country would impose a 25 percent tariff on imported steel and a 10 percent tariff on aluminum to protect American producers, but critics have said it would fail to boost jobs and risks starting a trade war with China.

The US oil and gas industry pounced on Trump’s plan to slap tariffs on steel and aluminum, saying the controversial move would kill energy jobs by raising costs for big infrastructure projects.

“It has been an honor to serve my country and enact pro-growth economic policies to benefit the American people, in particular, the passage of historic tax reform,” Cohn said in a statement.

“I am grateful to the president for giving me this opportunity and wish him and the administration great success in the future,” he continued.

Trump and Cohn had reportedly developed differences on the issue of trade policy. Cohn was staunchly against tariffs.

Cohn’s resignation follows that of White House communications director Hope Hicks, who announced her decision to step down last week.

Over the past year, several top Trump administration officials have departed the White House, including Stephen Bannon, Sean Spicer and Reince Priebus.

Trump believes the tariffs will safeguard US jobs but many economists say they will destroy more jobs than they create.