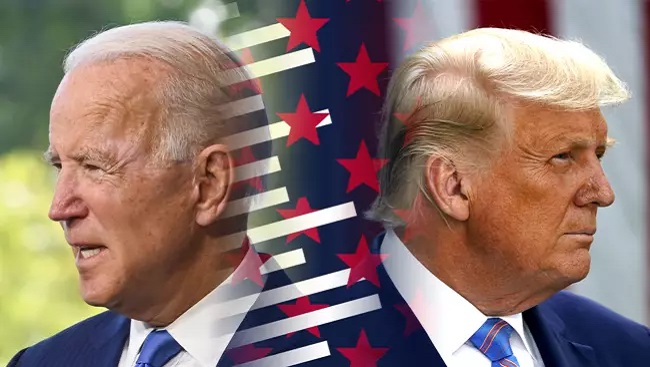 Donald Trump and challenger Joe Biden will participate in duelling town halls Thursday instead of clashing face-to-face in their second debate, as the US president seeks to jolt his struggling campaign 19 days before the election.

The split screen spectacle follows Trump’s three-day campaign tour of battleground states once doctors gave him the medical all-clear less than two weeks after he announced he contracted the coronavirus.

But even as Trump sought to mount a closing argument against Biden at a boisterous rally Wednesday in Iowa, promising an “incredible” third quarter for the struggling economy, the pandemic remained front and center.

Trump’s teenage son Barron contracted the coronavirus, First Lady Melania Trump revealed Wednesday in news that startled in part because it had been kept from the public for so long.

She said the 14-year-old, who goes to a private school near Washington, did not experience symptoms and has since tested negative.

“Barron Trump, you know, he had the Corona 19,” the president said in Des Moines. “He had it such a short period of time I don’t even think he knew he had it.”

The news, which had been kept under wraps despite global attention on Trump’s own health, thrust public attention firmly back on the pandemic and in particular on an outbreak within the supposedly highly secure White House over the last two weeks.

The issue plays a prominent part in Thursday’s simultaneous town hall events on major TV networks, as cases spike in several states and the US toll surpasses 216,000 dead.

The competing primetime appearances were organized after a head-to-head debate between Trump and Biden due to be held Thursday was scrapped in the aftermath of Trump’s Covid-19 diagnosis.

But while team Trump might be relieved that the president regains an opportunity to draw a contrast with his opponent, NBC faced criticism for letting the president bigfoot Biden in the same 8:00 time slot.

“Voters should be able to watch both and I don’t think many will,” she said, adding the matchup will benefit Trump “because people like to watch his unpredictability.”

David Canon, chair of the political science department at the University of Wisconsin-Madison, agreed.

But he said Trump may have committed a “tactical error” by backing out of a virtual debate with Biden.

“He needed the debates more than Biden did,” Canon told AFP. “He’s the one that needs to change the momentum in the election.”

Trump negotiated to go on NBC at an outdoor setting in Miami after Biden had arranged his own event on ABC in Philadelphia.

Previously Trump has appeared uncomfortable in town hall settings where ordinary voters ask questions. But as a former reality TV star and a keen follower of viewing figures, the president will at least be eager to attract a bigger audience than Biden.

The rivals were meant to have met on stage for their second debate, also in a town hall format.

However, in an unprecedented decision, organizers said they wanted to switch to a virtual format for safety reasons after Trump contracted the coronavirus. Trump rejected the new conditions, and the debate was scrapped.

NBC said it received a statement from the clinical director at the National Institutes of Health, Anthony Fauci, saying there was “a high degree of confidence” that Trump is now “not shedding infectious virus.”

Trump and the NBC host will be socially distanced at the outdoor venue and audience members will wear masks, NBC added.

The first of three scheduled presidential debates was widely criticized for descending into an angry shouting match as Trump attempted to inflict a late wound to Biden’s campaign.

“Joe is shot, OK?… Joe has lost it,” Trump said to laughter and cheers.

“If he wins, the radical left will be running the country. They’re addicted to power, and God help us if they get it.”

Furthering his long-running narrative that 77-year-old Biden is too frail for the presidency, Trump, 74, tweeted a crudely faked picture purporting to show Biden in a wheelchair.

Biden has stepped up his own courting of the important elderly vote, telling retirees in Florida on Tuesday that Trump has “never been focused on you.”

A RealClearPolitics average of national polls has Biden up by 9.2 points, with the Democrat leading in several key battleground states like Pennsylvania and Wisconsin.