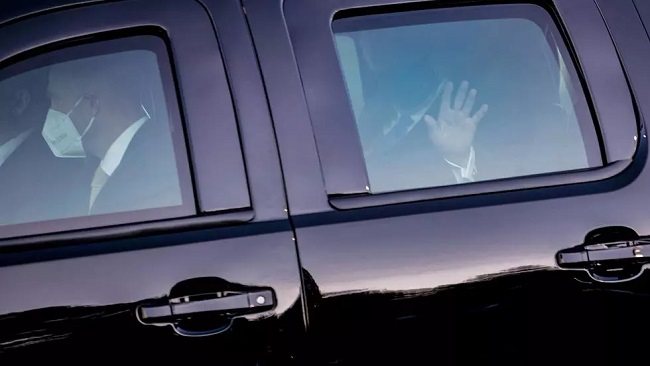 The White House bodyguards of the Secret Service are ever ready to “take a bullet” for the US president, but a danger they now face is Donald Trump himself, infected with Covid-19.

Trump’s rejection of masks in the White House and on the campaign trail helped foster a lack of vigilance that led to an outbreak among presidential staff and attendants, including several in the Secret Service, according to reports.

While being treated at the Walter Reed medical center near Washington on Sunday, Trump stretched protocol even further when he had a Secret Service team drive him around to wave to supporters outside the hospital.

The president and his bodyguards wore masks, but they were all in one vehicle with the windows shut, at a time when experts say he was highly infectious.

The White House later sought to justify the brief outing, saying “appropriate cautions” had been taken and that it had been “cleared by the medical team.”

“Every single person in the vehicle during that completely unnecessary presidential ‘drive-by’ just now has to be quarantined for 14 days,” he tweeted.

“They might get sick. They may die. For political theater.”

Risk is part of the job for the elite presidential protective division of the Secret Service. The agents travel with the US leader and the vice president at all times, famously putting themselves between attacker and target.

In 1963 Agent Clint Hill threw himself over the bodies of president John F. Kennedy and his wife Jaqueline after Kennedy, riding in an open car, had been hit by an assassin’s bullet.

“If I had reacted just a little bit quicker,” Hill later regretted. “I’ll live with that to my grave.”

In 1981 agent Tim McCarthy likewise shielded Ronald Reagan with his body and pushed him into his limousine after a shooter wounded the president and two others.

“That’s just part of the job,” says Ronald Kessler, who has written two books about the service. “When they sign up, they understand that they are going to be at risk, they could be shot.”

The Covid-19 pandemic has posed a different threat.

Battling an uphill fight to hold on to the White House in the November election, Trump has traveled the country holding rallies and fundraisers without requiring masks or social distancing.

Several Secret Service agents were forced to self-quarantine after a June rally in Tulsa, Oklahoma, and the same happened again after a July speech to sheriffs in Tampa, Florida led to positive Covid-19 tests, according to the Washington Post.

The service also had an outbreak at its training academy in Maryland.

For what it called “operational sensitivity,” the Secret Service would not discuss how coronavirus has impacted them.

Kessler, who has also written a book about Trump, said the agents were “very loyal” to the president, whom he said “treats them with respect and consideration.”

Nevertheless, he added: “My opinion is, why take unnecessary risks and send the wrong message in this case when he took his jaunt?”

Michelle Obama, who as the wife of former president Barack Obama continues to enjoy Secret Service protection, took aim at Trump in a tweet on Tuesday.

“My heart goes out to everyone touched by this virus,” she wrote, “especially the Secret Service and residence staff whose service ought never be taken for granted.”