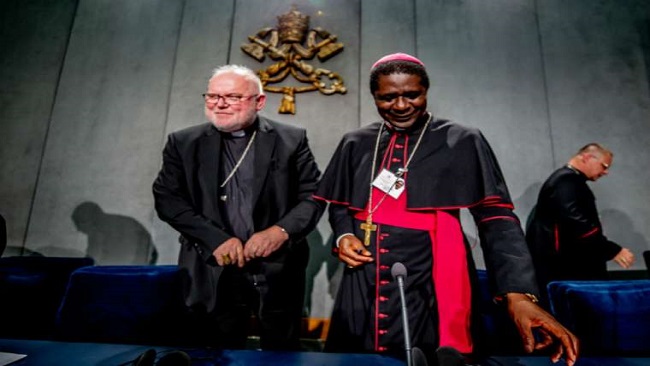 While European bishops discuss how to bring young people back to the Church at the 2018 Synod of Bishops, one bishop from Cameroon said that he has the opposite problem.

“My churches are all bursting, and I don’t have space to keep the young people,” said Bishop Andrew Nkea Fuanya of Mamfe said at a Vatican press conference Oct. 24. “And my shortest Mass would be about two and a half hours,” he added.

A study by Pew Research Center in August 2018 found that church attendance and prayer frequency was highest in sub-Saharan Africa and lowest in Western Europe. Four out of five Christians in Cameroon said that they pray everyday.

“People ask me, ‘Why are your churches full?’” the Cameroonian bishop said. For Bishop Fuanya, it all comes down to family, community, and traditional values.

“Coming from Africa, the family is a very, very strong institution,” Fuanya said. “We come from a culture in which tradition normally is handed from one generation to the other.”

“Our traditional values still equate to the values of the Church, and so we hand over the tradition to our young people undiluted and uncontaminated,” he continued.

When asked about the potential inclusion of so-called “LGBT” language in the synod’s final document, the bishop reiterated that point.

“I wouldn’t vote for any article that has LGBT.” Fuanya said,  explained that “99.9 percent” of the young people in his diocese would “stand at my door and say, ‘What’s this?’”

“With matters of doctrine that the church teaches, it is not like in this synod we are trying to invent new teaching … Jesus is the way, the truth, and the life … we cannot be taking positions that contradict the Gospels,” he added.

On that point, Cardinal Reinhard Marx, Archbishop of Munich and Freising, told the press conference: “Quite honestly I don’t remember that we had discussed this issue in Germany so I can’t acknowledge that there is a specific conversation on this.”

“This is not a synod on sexuality. It is a synod on the young,” Marx added. Fuanya suggested that two of the key ways in which the faith and teaching of the Church is handed over to younger generations are through the family and community. In these, he said, the African Church was setting an example.

“Church as community. Church as family is very strong for us,” said the bishop. A strong sense of community in the Church is something “very important that Europe can learn from Africa,” Fuanya said.

In Africa, “there’s still a lot of things we do as community. That is the difference. What we are trying to do in these small Christian communities is to fight the increeping of individualism,” he added. There are significant demographic differences in family size in Europe and Africa.

A 2010 USAID report on the number of children desired by people in various parts of the world,  showed that the desired number of children is highest among people in western and middle Africa, ranging from 4.8 in Ghana to 9.1 in Niger and 9.2 in Chad, with an average of 6.1 children for the region.

In the European Union, 47 percent of households with any children only have one child, only thirteen percent have three or more children, according to 2017 data.

While the differences between Europe and Africa could provide helpful lessons, Fuanya noted that the synod was about seeking a universal perspective.

“It is not like Africa has come to help Europe solve their youth problem, it is the Church that has come together to see how to solve the problem of the youth,” Fuanya said.

“It is the Church that needs to change … the youth have said this,” he continued. “We need to do this together in the theme of accompaniment.”