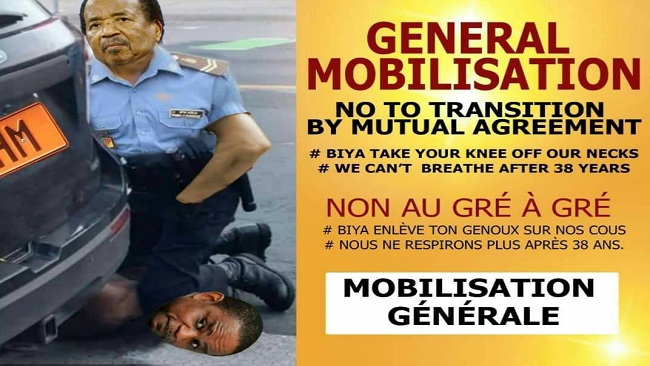 “Wazizi was neither charged nor tried. He died for being a journalist” 0

Without free speech, there is no liberty. It is the duty of the mentally autonomous to demand and defend freedom of speech and expression. With this duty comes the realisation that it is also about speech they disagree with.

Last week’s confirmation from the government of the Cameroons that Samuel Wazizi, a journalist, with a local station, CMTV, Buea has died whilst in detention is inexcusable. Wazizi was neither charged nor tried. He died for being a journalist.

On the 8 June 2020, after unrelenting pressure from human rights organisations and international media, the regime in Yaoundé released information that Kingsley Njoka, another journalist who was abducted on the 15 May 2020, has been detained incommunicado at the Secretariat of Defense (SED) Yaoundé. Lawyers who were allowed to meet him observed that he was frail, pale and traumatized psychologically.

Cameroon is an obscured nation of 25 million inhabitants in the Gulf of Guinea. It’s been governed with an iron-fist by Paul Biya, the world’s oldest dictator. The country’s political and economic challenges are countless and growing. Although, blessed with natural resources, it is plagued by the Boko Haram insurgency in the north and a political unrest in the south.

It has a terrible human rights record and a scandalous record on press freedom. It is ranked 134th out of 180 countries and territories in RSF’s 2020 World Press Freedom Index.  It is obvious that freedom of speech is an offence in the country and this is incompatible with a free society. The criminalization of free speech results in fear and bondage existence. In Cameroon, there are reports of countless acts of brutality to proponents of freedom of speech and expression. This is unacceptable!

The death of Samuel Wazizi and the detention of Kingsley Njoka have employed little empathy from the regime in Yaoundé and their collaborators. The authorities and the country’s military fear no consequences from its citizens and the international community for their actions.

The ignorance or wickedness of those who enjoy freedom of speech and expression in western democracies but support the evil perpetrated by dictators such as Paul Biya is worrisome and must be condemned. Successive French Presidents have given Paul Biya carte blanche and he has not let them down.

Since taking power almost four decades ago, Paul Biya has been increasingly hostile in his attacks on free speech. He seeks to quiet his critics, whom he considers sinners in publicly exposing his voluminous shortcomings. His imprisonment and execution of many political critics, especially journalists and scholars has remained unreported and unpunished due to his meticulously designed web of state-sponsored intimidators and murderers.

It is impossible to envisage anywhere on this planet a group of organized lawbreakers working effortlessly in harmony and impunity than the police and gendarmes in Cameroon. It should marvel any discerning mind that such savagery as incommunicado detention is a regular occurrence in the twenty-first century. The Idea that small minded criminal elements could eliminate freedom of speech in a country exhibits an utter lack of appreciation of history.

The appreciation of the value of freedom of speech and expression by tyrants is one challenge that man has had to face over the centuries. Tyrants and bigots fear freedom of expression because it exposes their smallness and lack of humanity. Arbitrary and unlawful arrest, intimidation, murder and political imprisonment are tools used to stifle debates and they also give the oppressor a false sense of authority.

Despots must understand that people perceive things differently. The failure of any government to uphold freedom of speech and expression betrays its principal duty to the people.  Man is a learning and growing animal. When man stops learning, he stops growing. The ruling class in Cameroon has made a conscious decision to not learn anything from history and thus their collective lack of growth is stunting the nation they govern.

Terror and oppression have never propelled man to growth and success. The great contributors to man’s progress since his appearance on this planet have been men and women who have been allowed to flourish in free societies. Man makes his greatest contribution to humanity when he is free to exercise his freedom of thought and expression. This explains the decline in political, economic and scholarly progress under the rules of tyrants.

The criminalization of free of speech and expression in the Cameroons exposes one of the reasons for its economic and academic backwardness despite being blessed with enormous natural and human resources.

The primary function of any organisation is to help men and women enjoy a more meaningful existence. If the leaders of any organisation, a business or country included, are not helping humans attain the aforementioned, they shouldn’t be in the organisation. The political leaders in Yaoundé need to take a look at themselves and make speedy decisions.

Wazizi has been murdered for being a journalist by a regime that exhibits an utter obliviousness of history and spotting the trend in a changing world. But the free speech he stood for will live longer than his murderers and their brutal and ignorant institutions.