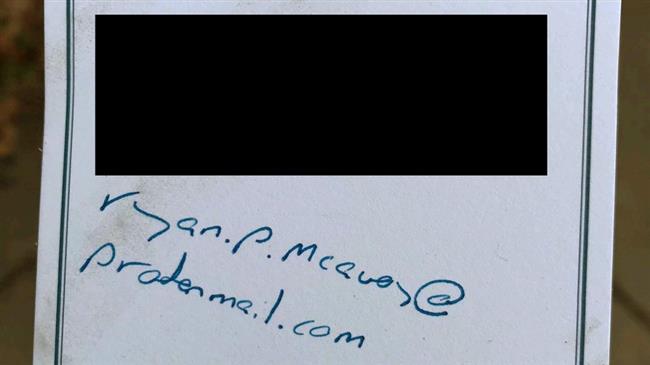 Ryan McAvoy, a staffer working for the administration of US President Donald Trump, reportedly left the passwords to his encrypted email account at a bus stop in Washington, DC.

The aide left his ProtonMail passwords at a bus stop near the White House, according to a report by The Intercept, which obtained and verified them on a piece of White House stationery.

The Intercept‘s requests for comment is yet to be returned by the staffer.

The report may add ProtonMail to a list of messaging services that House Intelligence Committee Democrats want to know more about their usage on the encrypted networks in the White House, such as WhatsApp, iMessage, Facebook Messenger, Signal, Slack, Instagram and Snapchat.

On Wednesday, Democrats on the panel released a memo in regard to the so-called Russia probe, which investigates Moscow’s alleged intervention in the 2016 presidential election as well as possible collusion between Trump’s aides and the Kremlin.

The Democrats, who may file a new subpoena, are specifically willing to know how senior White House adviser Jared Kushner, Trump’s son in law, used WhatsApp.

Peter Mirijanian, a spokesperson for Kushner’s attorney, Abbe Lowell, told The Intercept that Kushner had nothing left to add as “in two different appearances before congressional committees, Mr. Kushner answered all relevant questions involving these matters.”

Kushner is a person of interest in the ongoing probe into Russia’s alleged intervention in the 2016 presidential election that yielded President Trump.

During the 2016 campaign, Trump repeatedly attacked her Democratic contender Hillary Clinton over use of a private email server during her tenure as the secretary of state from 2009 to 2013.