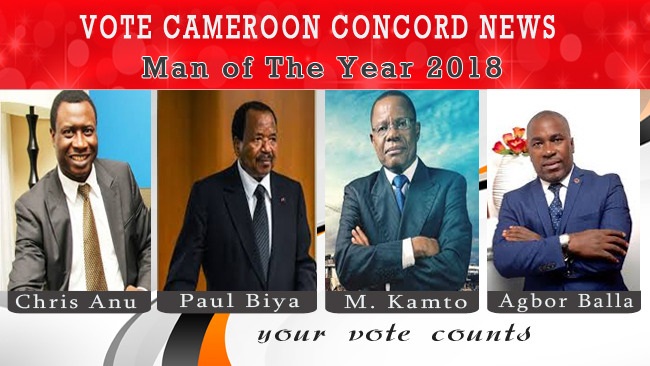 Who Should Be Cameroon Concord News Person Of The Year 2018? 0

Samuel Eto’o, Bishop Emeritus Francis Teke Lisinge and former Nigerian Head of State, Goodluck Jonathan have all won the award. In 2017, the Cameroon Concord News Person of the Year award was accorded to the Southern Cameroons and all its citizens individually and collectively. The collective nature of this choice was justified.

Fifty-six years ago, the Southern Cameroons a United Nations Trust territory under British administration, was betrayed and sold off to France through its vassal state of French Cameroun. Great Britain and France were among the key actors on whom humanity relied to create the United Nations on the 26 of June 1945 in San Francisco. This underscored a firm determination of the civilized world “to reaffirm faith in fundamental human rights, in the dignity and worth of the human person, in the equal rights of men and women and of nations large and small’. In consequence therefore, the United Nations Organization went operational on 24 October 1945 with among other goals to fulfill a critical determination to meet its charter obligation under article 76 (b) “to promote the political, economic, social, and educational advancement of the inhabitants of the trust territories, and their progressive development towards self-government or independence as may be appropriate to the particular circumstances of each territory and its peoples and the freely expressed wishes of the peoples concerned, and as may be provided by the terms of each trusteeship agreement”.

Pursuant to this multilateral treaty obligation, the United Nations oversaw the grant of independence to French Cameroun on 1 January 1960 although; it remains a vassal state of France. When the time came for the realization of the UN multilateral treaty obligation towards the Southern Cameroons on 1 October 1961, Great Britain handed the articles of sovereignty over the territory to French vassal state of French Cameroun and France’s proxy army of occupation in the night of 30 September 1961.  Ever since, the genocidal onslaught and ferocious intensity with which it is executed qualifies the Southern Cameroons as a cancer on the conscience of the international community.  The genocide that was carefully weaved into the slave deal apart, the racism that underpinned the callousness of the impunity with which Southern Cameroons was sacrificed to satisfy or fulfill the imperial economic interests of Britain and France, more than anything establishes that these superpowers perceived the United Nations as an institution they may rely on to legitimize imperial domination over supposed independent African nations.  The selling off the Southern Cameroons into slavery at its threshold to independence explains this eloquently.

This is further explained by the complicit silence or inaction of the UN to the consequences in terms of Southern Cameroonian lives lost, legal and cultural identity destroyed, economy raped and culture of terror, and international criminality imposed on the Southern Cameroons on the watch of the UN and its ancillary institutions.  Judging from the timid and complicit statements of the France-Afrique neocolonial UN Secretary-General Representative for Central Africa, François Louncény Fall of Guinea an avowed paid agent of French Cameroun aimed at whitewashing the genocide of Southern Cameroons by attempting to make victims out of French Cameroun criminal genocide executioners, it is safe under these circumstances to conclude that  the infiltration of the international system over the years rather than dissuade, encouraged impunity and

Despite these obstacles and the seemingly insurmountable odds against the Southern Cameroons, after fifty-six years of excruciating life under genocide, terror, economic terrorism, and all forms of international criminality imaginable, the people rose as one on the 22 September 2017, and ultimately on 1 October 2017 to reclaim their freedom and independence.  Many of 2017’s biggest headlines were a reflection of the year that preceded it.

In 2018, a warning from the Cameroon Intelligence Report to the leadership of the Ambazonian Interim Government that Nigeria was planning to betray them was not taken seriously but it however escalated into a major crisis. Another major news item of 2018 is the emergence of Barrister Agbor Balla into the Cameroon political story and an election in French Cameroun that placed President Biya and Prof. Maurice Kamto at daggers-drawn positions. Outside the two Cameroons, France’s Emmanuel Macron was in Nigeria, Ali Bongo of Gabon suffered a massive stroke and the political factions in Kenya reconciled.

The Ambazonian Communications Secretary, Chris Anu, the 85 year old President Paul Biya, Prof Maurice Kamto and Barrister Agbor Balla have indeed had the most influence over the news in the last 12 months. It is now our duty as Cameroon Concord News People to decide who should be the person of the year.

Voting can be done using the comment link or via email