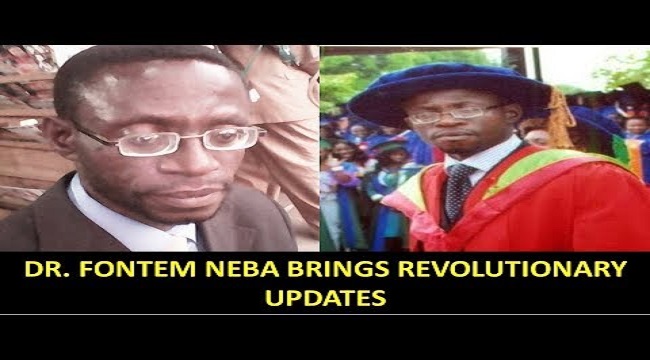 The Wedge in our Struggle

My people, there are a number of things the enemy has done to us through these fellows to systematically disrupt our struggle or restoration quest.

1. They killed trust in leadership by propping up dishonest guys in our midst. The act of smearing honest people and making them look untrustworthy is by far the deepest cut. Crooks have become our reference point. No wonder, we no longer trust anyone. Those who can drive this struggle have crumbled under the bullets of unverified calumny. So, when a good idea comes from them, we pull up the smear and use the stench to disqualify its proponent, then the bad guy continues to shout “Feeloo ambazoonians”. No plan on how to move forward except bannings and sowing division. Simple tactic!

2. Disunity among the leadership, so that no constructive action can be taken against LRC. They only agree when the action will not favour us. See the Swiss initiative. They were already exposing our fighters to the Swiss and pushing everyone into their luggage when the plan leaked and the trip by the LGA chairmen to Switzerland was aborted. That was a massive brainwashing scheme that would have brought our liberation struggle crashing. And they were just happy to go and see Switzerland, not knowing that it was a satanic plot.

4. Egotism and the love for money have driven a wedge between us and our goal. Why would someone remind anyone offering to mediate about money owed him by LRC at this time? Why would someone even place a financial precondition for holding talks? Why would someone lie that he has the largest force on the ground and use that to position himself as a power broker before the Swiss? Why would a group of people decide, against expert advice, to sign away to the Swiss their right to a multilateral mediation format? Why would SCian politicians accept Swiss money to go from UK, Canada to the US advertising the Swiss initiative to the exclusion of the European institute for peace (an EU funded organisation)? These questions beg for answers.

4. Disrupting fund raising projects is a major scheme to render the struggle bankrupt, apart from embezzlement. Every time a seemingly viable fundraising initiative is laid out, they too will do theirs and distract the public that is already weary of bickering.  They cause the public to transfer their stigma on it, and when the momentum dies down, they abandon theirs. See the bonds, the pins and other financial ideas.

5. Disinformation and Misinformation of the masses. Using their very loud megaphone, they distort every notion of good. Points 1-4 above have been achieved through the alphabet TV and paid social media activists. Some of them puts out their write-ups using the name of some of these activists in exchange for a fee. They deceive the people at home about non-existent diplomatic moves and breakthroughs and distort international relations concepts. It’s like a veil of darkness cast over our people’s heads.

5. The lure of power and the desire to exercise corrupt influence . Even some of the IG converts in the diaspora are easily brainwashed because of the temptation of corruption. Many of them see themselves as an emerging Bulu/Beti clan when we restore our independence. So, they use that to make their communities and families believe that as future ministers and LG chairmen in SC, they will have more benefits and influence than others – greed! Let them show us the blue print or the strategy that will take us to Buea.

6. Killing or disarming our own fighters cannot be excused on any grounds. Is it surprising that we have lost more of our elite soldiers to our own bullets than to LRC? After commissioning Nambere to eliminate some of his peers, it was time to do away with him so that all traces could be wiped. But he preferred to surrender to the enemy than to succumb to the bullets of his own people. He confided his ordeal to those who were ready to listen.  This is a familiar scenario which the RFs do not yet understand. Many who sensed danger have fled the resistance because they don’t know when the order for their execution will come. Others have been captured because their position was deliberately leaked to the enemy. Who does that? Does the mass execution of the Bui 23 tell us anything?

I have travelled round this country and have met different people who have complained about the manner in which they were robbed in broad day light and lamented the general state of things. They told me how they were harangued into donating thousands of dollars for diplomatic trips which never happened. In others, Ngwa Irene personally went there and collected $12000 cash and when the community asked for a receipt it became a brawl. Some communities have not recovered from the financially induced coma caused by these buccaneers.

I challenge all those hiding in WhatsApp groups or FB, wearing aliases to come to a public debate to explain their plan for the restoration, if there is any, and stop using subterfuge to deceive our people. If you cannot diagnose a disease, then you cannot treat it.

Yours in the struggle