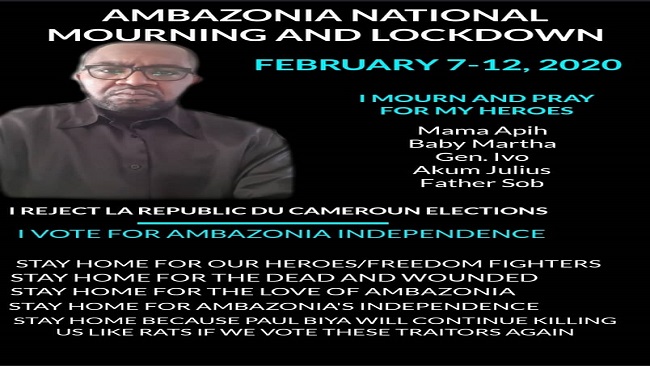 The leaders of the Ambazonia nation, President Sisiku Ayuk Tabe and the Southern Cameroons Interim Government have opined that the people of British Southern Cameroons have no reason to be optimistic about the future of the Federal Republic of Ambazonia in La Republique du Cameroun.

From February the 7th to the 12th, Southern Cameroonians with slavish minds including Ministers Paul Atanga Nji, Paul Che Elung, Paul Tasong, Victor Mengot and a certain Lady Nalova will go to the polls in a French Cameroun teleguided elections,  we of the Cameroon Concord News and the Cameroon Intelligence Report will be joining Vice President Dabney Yerima, the Ambazonia Interim Government and millions of Southern Cameroons citizens both in Ground Zero and in the diaspora in boycotting the French Cameroun contest — refusing to participate in our own marginalisation and declining to serve as a pawn for a state that exists for and of the French Cameroun people only.

In the French capital Paris last year, the French Cameroun head of state, Paul Biya told an audience during a Mo Ibrahim Show that La Republique du Cameroun is not a state for all its citizens: According to the ailing leader who will be 87 this February, La Republique du Cameroun is the nation-state of the Francophone people, and French speaking people only. Biya reiterated his message, telling the world that the French government and the UN gave French speaking Cameroonians a mission to assimilate British Southern Cameroonians.

The recent massive deployment of Francophone soldiers and elements of the French Cameroun gendarmerie force was pushed by Beti Ewondo political elites advocating that the Francophone dominated regime in Yaoundé should be forcibly moving Southern Cameroonians to neighbouring Nigeria. In a final bid to gin up support, the Biya Francophone government over the weekend dished out huge sums of money to all political parties taking part in the elections.

The late mayor and government delegate to the Yaoundé City Council, Ema Basile even developed a diabolic harsh ploy that prevented Southern Cameroonians from acquiring land in the Center Region and in the nation’s capital. Those who succeeded in the purchase of land in Yaoundé passed the CPDM imposed loyalty test of speaking the French language fluently.

Senior French Cameroun political elites have in many occasions challenged Southern Cameroons pro Yaoundé leaders to go and live under Nigerian rule, citing their lack of loyalty to Biya and the French Cameroun discriminatory state institutions.

Let it be told that for 58 years, Southern Cameroonians in La Republique du Cameroun have been living under what can best be described as Ahidjo-Biya Military Government which with the backing of successive French governments has slowly but surely suspended most of Southern Cameroons’ civil rights and legal protections.

Is it any wonder that many Southern Cameroonians continue to view their La Republique du Cameroun citizenship as a mere political fiction?

Biya and French Cameroun political elites have publicly proclaimed La Republique du Cameroun as the only functional democracy in the Central African Sub region. But in the end, elections in a country  where candidates go for campaigns in armored vehicles surrendered by heavily armed French Cameroun soldiers and that only one group of people (French speaking Camerounians) enjoy full rights as citizens are nothing but a fig leaf for apartheid.