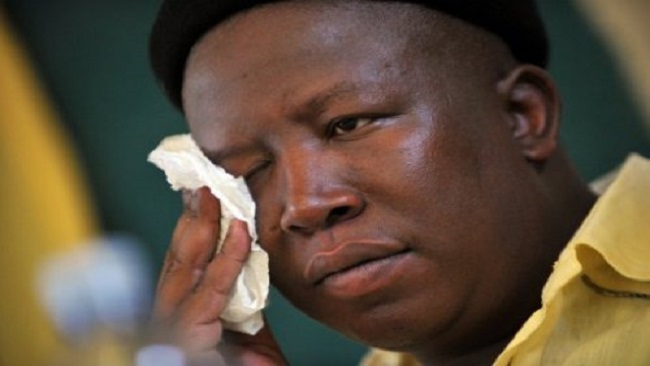 Winnie Mandela Tribute: Julius Malema says Mother of the Nation should have been president 0

As tributes poured in for Winnie Madikizela-Mandela who died on Monday, the head of South Africa’s leftist opposition party said misogynists in the ruling ANC had prevented her taking her rightful place as president.

Economic Freedom Fighters (EFF) leader Julius Malema stood side by side with senior African National Congress (ANC) figures outside Madikizela-Mandela’s red-brick house in Soweto, chanting songs from the struggle against white minority rule as mourners gathered for a second day.

The Mother of the Nation would have restored the dignity of black people.

Former ANC youth leader Malema, a strident critic of ousted president Jacob Zuma, was close to Madikizela-Mandela and has the same straight-talking appeal.

He was ejected from the ANC after being convicted of hate speech and created the EFF in 2013 which grew to be strong enough to be a ‘kingmaker’ in local government elections in 2016.

An ANC spokesman did not answer his phone when Reuters called to request comment on Malema’s remarks.

Madikizela-Mandela campaigned tirelessly for her husband Nelson Mandela’s release from jail and emerged as a prominent liberation hero in her own right, but her legacy was later tarnished by allegations of violence.

She was among candidates for ANC deputy president in 1997, a position that would have teed her up for a top national leadership role, but withdrew her bid after failing to secure sufficient support.

“The Mother of the Nation would have restored the dignity of black people,” Malema said, adopting an epithet widely used in South African media to reflect respect for Madikizela-Mandela’s outspoken opposition to the apartheid regime.

Madikizela-Mandela will be given a state funeral at a stadium in Soweto on April 14, President Cyril Ramaphosa’s office said in a statement declaring national days of mourning between April 3 and 14.