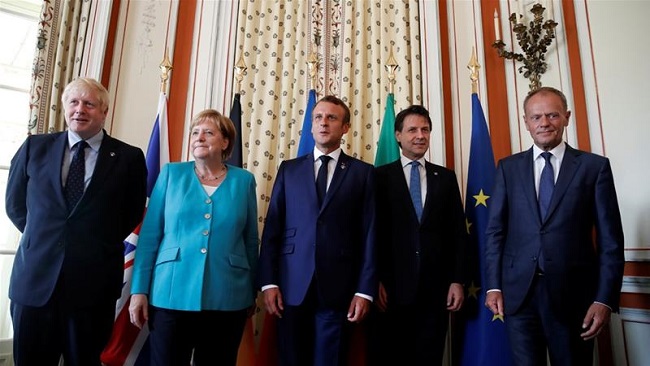 In their New Year messages, leaders of various countries have called for courage and efforts to make 2020 a better year, and overcome challenges as we enter a new decade.

In a New Year speech delivered on Tuesday evening, Chinese President Xi Jinping pledged to achieve the first centenary goal of building a moderately prosperous society in all respects for China in the “milestone” year.

Xi stressed the year as “crucial in winning the anti-poverty battle” in China, and voiced the hope for a prosperous and stable Hong Kong. “We are not afraid of winds and rains, or any kind of difficulties,” said the Chinese president.

Xi reiterated China’s commitment to peaceful development, world peace and common development, saying “we stand ready to join hands with people around the world to actively build the Belt and Road, push for the building of a community with a shared future for humanity, and work tirelessly to create a better future for humanity.”

Russian President Vladimir Putin said in his New Year message for the Russian people: “We are living in turbulent, dynamic and contradictory times, but we can and must do everything for Russia to develop successfully, so that everything in our lives changes only for the better.”

He called for unity and concerted efforts by the Russian people, noting “our personal plans and dreams are inseparable from Russia.”

German Chancellor Angela Merkel, in her New Year’s Eve address, appealed for courage and confidence of the German people to meet the challenges of the new decade.

She emphasized the need to halt climate change, a “real” threat. The younger generation will have to live with the consequences of climate change if politicians do not act, Merkel said, adding that she will do her utmost to ensure that Germany “makes its contribution ecologically, economically, socially” to get the issue under control.

In the New Year’s Eve address broadcast live on Tuesday evening, French President Emmanuel Macron vowed to push through the government’s pension reform plan, which was met with union-led national strikes in December.

“The pension reform will be fully carried out,” said Macron, adding he hopes to quickly find a compromise with unions.

The promise to take Britain out of the European Union by the end of January was reaffirmed, and national efforts to usher in a remarkable decade of prosperity and opportunity were urged by Prime Minister Boris Johnson in his first New Year message at 10 Downing Street.

“The first item on my agenda is to fulfil the will of the electorate and take us out of the European Union,” said Johnson. “We can start a new chapter in the history of our country, in which we come together and move forward united, unleashing the enormous potential of the British people.”

For 2020, Japanese Prime Minister Shinzo Abe in his New Year’s statement on Wednesday made reforms a priority for his government, including creating a social security system that can help people live in a more carefree manner.

Abe also expressed his hope for a successful execution of the Tokyo Olympics and Paralympics to be held this summer, saying he hopes the games will be a wonderful event that will excite children and let them have dreams for the future.

When sending New Year greetings via social networks on Tuesday, Chile’s President Sebastian Pinera described 2019 as a difficult year for the South American country, which has since mid-October suffered widespread anti-government protests fueled by anger over social troubles.

“But it left us valuable lessons and opportunities so that together we can build a better Chile for all,” he said, adding that the new year is a good time to make balances and projections and work to heal the wounds of the country.

In his end-of-year address to the nation Tuesday evening, Cameroon’s President Paul Biya vowed to continue fighting armed separatists in the central African country, saying the separatists pose “one of the most urgent problems.”

Meanwhile, he said new legislations on greater autonomy to local communities and bilingual and multicultural practices are paving the way for a new Cameroon that is “adapted to present times and looks to the future.”

He said his government has made plans to get the landlocked central African country out of a harsh economic situation, and pledged the continued empowerment of women in national development.