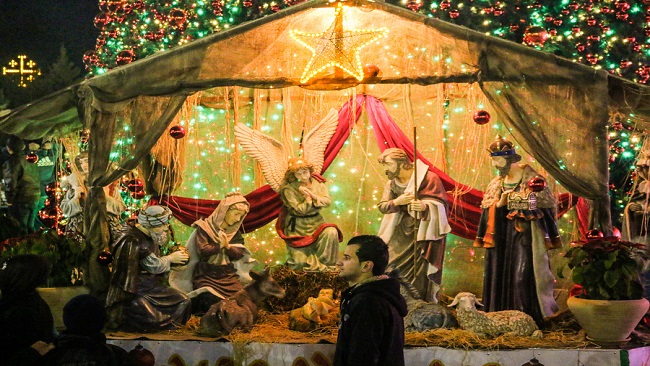 Christian pilgrims from around the world have gathered in the occupied West Bank city of Bethlehem to celebrate the birth of Jesus Christ, as local Palestinians suffer from decades of Israeli occupation.

Thousands of Palestinians and foreigners began converging early Tuesday morning on the “little town” in Bethlehem, as the traditional birthplace of Jesus Christ, to hold Christmas Eve festivities in and around the Church of the Nativity.

Archbishop Pierbattista Pizzaballa, apostolic administrator of the Latin Patriarch of Jerusalem and the most senior Roman Catholic official in the Middle East, who traveled from the holy city to Bethlehem, is scheduled to lead midnight mass at the church in the presence of Palestinian Authority President Mahmoud Abbas.

Pizzaballa said although it was a difficult time, there was reason for “hope.”

“We see in this period the weakness of politics, enormous economic problems, unemployment, problems in families — so when we look at this reality, we could say that there is nothing to hope for,” he said.

“On the other side, when I visit families, parishes, communities, I see a lot of commitment… for the future. Christmas is for us to celebrate the hope,” he added.

Rula Maaya, Minister of Tourism and Antiquities of the Palestinian Authority, said the number of foreign tourists visiting the West Bank increased from three million in 2018 to 3.5 million in 2019.

She added that at least 15,000 pilgrims were staying overnight in Bethlehem for Christmas, adding, “All hotels in the city are full today.”

Tourists queued in the morning to visit the grotto inside the Church of the Nativity, believed to be the exact site where Jesus was born.

Fewer Christians from the Gaza Strip were in attendance due to the Israel regime’s restrictions on issuing permits.

Israel granted permits to just around 200 of the roughly 900 people who applied, Wadie Abunassar, an adviser to church leaders in the Holy Land, told the AFP.

Bethlehem is close to Jerusalem al-Quds, but cut off from the holy city by Israel’s separation wall. Israel began building the barrier in 2002 which runs through the West Bank, separating Israeli Jews from Palestinian Christians and Muslims.