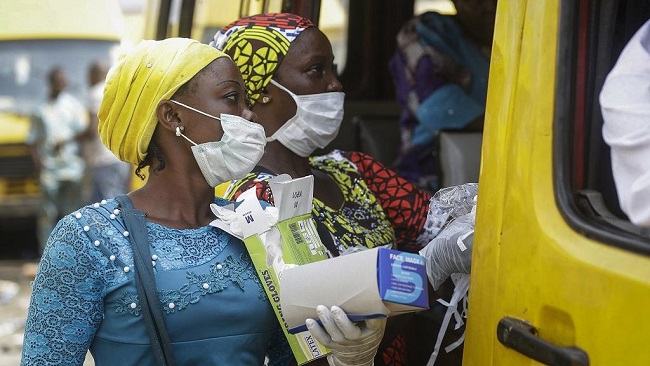 Cameroon has required the wearing of face masks by all of its citizens and begun large scale production of Chloroquine to treat COVID-19. The country says its hospitals are already overwhelmed, with more than 850 confirmed cases within 6 weeks, yet it expects confirmed COVID cases to rise into the several thousands.

Almost everyone on the streets of Yaounde began wearing masks Monday. Police were out to enforce the measure, taken by the government to limit the spread of COVID-19. 22-year old Christian Yubin speaking via a messaging App said the police forced him to buy and wear a mask.

“Temperatures are very high, up to 35 degrees and they are asking us to wear masks which suffocate us. I think the best thing to do is to respect social distancing. Stay far from people,” said Yubin.

Dr. Georges Alain Etoundi Mballa, director of pandemics and epidemics at Cameroon’s public health ministry said they are insisting on preventive measures because hospitals are already being overwhelmed by the number of COVID infected persons.

He said with the ever-growing number of infected persons, the government has asked people who are feeling better in hospitals, including COVID-19 patients, to return to their homes, where they will have medical follow up by hospital staff. He said the government is also transforming football stadiums and gymnasiums into facilities where COVID-19 infected persons will be received for treatment.

Madeleine Tchuente, Cameroon’s minister of scientific research and innovation, said besides the obligatory wearing of masks, the government has ordered the production of the drug chloroquine to treat COVID-19 patients. She said they have started producing 6,000 tablets per day and expect to drastically increase production when they get some more ingredients from China.

Tchuente said President Paul Biya has ordered them to produce at least eight million tablets of chloroquine each day as the situation is getting worse. She said Cameroon has the know-how and laboratories to produce the chloroquine but what they lack are the necessary active pharmaceutical ingredients they can import from China and India, and that China has assured Cameroon that the ingredients will be shipped in two weeks.

Chloroquine is one of the oldest and best-known anti-malarial drugs. It has also attracted attention over the past few decades as a potential antiviral agent. Last week, Cameroon announced that it had seized counterfeit chloroquine from at least 300 pharmacies and hospitals and closed two fake pharmaceutical companies as thousands of its citizens were rushing for the drug with the unproven believe that it can stop COVID-19 infections.

Emmanuel Anyangwe Ngassa, a Cameroon-born medical doctor practicing in Germany, said U.S president Donald Trump is leading many African countries to believe there is a cure for COVID-19, when scientists have not yet announced any. He spoke via a messaging App from Bonn.

“What is the essence of that drug? Chloroquine has not been proven to treat COVID-19 successfully. It was unfortunate that Donald Trump took this thing up, spoke about it and publicized it,” he said.

The rush for chloroquine as a treatment to COVID-19 began in Cameroon in March after France announced that half of 14 patients who underwent chloroquine therapy got better and when U.S President Donald Trump referred to it as a potential cure for the ravaging coronavirus disease.