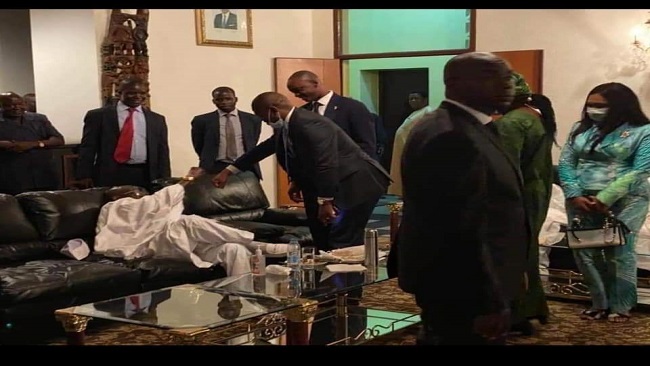 Cameroon medics in Yaoundé have issued an urgent secret memo to the Prime Minister and Head of Government, Dion Ngute to protect health workers in L’hopital Central and L’hopital Jamo in Yaounde after finding extensive levels of coronavirus contamination in specialist wards and intensive-care units used by National Assembly Speaker, Cavaye Djibril and senior MPs and secretaries who came in contact with the 80 year old French Cameroun politician ever since he returned from France.

The widespread contamination was revealed to Cameroon Intelligence Report Yaounde city reporter by a source at the Prime Minister’s office late yesterday and involved several patients and visitors who recently filled the wards and waiting areas in the Yaoundé hospitals.

Despite extra government procedures that were introduced to prevent information flow on the bill of health of the ailing National Assembly speaker, it is now being reported that Cavaye Djibril has caused significant contamination in the nation’s capital after he participated in the recent parliamentary session and came in contact with hundreds of people immediately after he was reelected as speaker.

Yaounde is in panic mode as intensive care units and obstetric wards caring for very sick people now have to start dealing with the dreadful coronavirus, which has prompted even the jihadist terrorist group, Al-Qaeda to halt operations. We also gathered that senior government officials have tested positive.

Coronavirus is spread primarily by droplets that are coughed or sneezed into the air by people who have the infection.

Cavaye Yeguie Djibril had confused parliamentary immunity with sanitary immunity by rushing to the national assembly. He attended at least 2 plenary sessions in the National Assembly. The Speaker seen here on photo is now being greeted with precaution. Many have been asking if Cameroon is now moving towards the quarantine of the 167 MPs currently in the lower house of parliament.

Cavaye Djibril was part of an Air France flight declared to be high risk by the medical authorities of the Yaoundé Nsimalen international airport. The Minister of Health therefore immediately requested that all passengers on this flight observe 14 days of self-isolation.