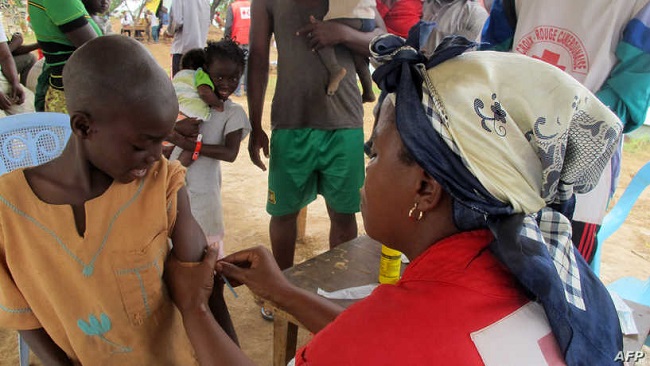 Cameroon has organized a national vaccination campaign to stop a measles outbreak that has infected more than 3,000 people, especially children, this year. The most-affected area is the central African state’s northern border with Nigeria and Chad, where 17 children have died this month. Health officials believe many more people are infected, since barely 30% of the population visits conventional health facilities.

Dr. Edzoa Brice, coordinator of the vaccination teams dispatched to towns and villages around Cameroon’s capital city, Yaounde, says vaccination teams are stationed in all road junctions, churches, schools, markets and popular spots, and will not be visiting homes as they have always done in the past. He says back the teams found that few parents and children were at home as they had gone to schools, farms, offices or markets.

Nurse Theresia Mabuh, a member of the vaccination team from Cameroon’s Public Health Ministry, says the vaccination campaign is aimed at saving millions of lives threatened by the outbreak.

“It is efficient, it is simple and it is free for all the children, so I am calling on all the parents, all the mothers to [have their children vaccinated]. We also have the deworming of children from 1 year to 5 years. We have vitamin A that is given [to children aged] from 6 month to 5 years,” Mabuh said.

The Public Health Ministry reports that  the northern regions, where more than 2,000 of this year’s 3,000 reported cases have occurred, have higher birth rates and lower routine vaccination coverage, as barely 3 out of every 10 mothers visit conventional health facilities. They prefer African traditional medical practitioners, who are more accessible and available than hospitals which are often very far away, understaffed and lack medication. Fear and misinformation make some distrust vaccinations. Some parents either refuse or forget to have their children vaccinated when they are 9 months old, as recommended by the World Health Organization.

Twenty-three-year old mother of two Loveline Tossam says it was after she lost her 2-year-old daughter shortly after she arrived at the Biyem Assi district hospital in Yaounde that the medical staff informed her that she had to vaccinate her children.

“She was coughing. She was very weak and she was vomiting ceaselessly. Twenty-four hours afterwards, we lost her and it is now that I am learning that we had to go for vaccination,” Tossam said.

The WHO lists vaccination hesitancy as one of the top 10 threats to global health that have  been leading to the resurfacing of measles is some countries.

Dr. Phanuel Habimana, WHO resident representative in Cameroon, says people should trust the vaccines’ ability to save lives.

He said people should be informed that the vaccines given to their children are efficient and certified by the WHO. He says he was also vaccinated when he was young and is calling on community, religious, opinion and political leaders and everyone in authority to educate all parents to allow their children to be vaccinated. He says after the campaign, the knowledge of the need for routine vaccinations for newborns should be reinforced.

Two injections of a vaccine can prevent measles, and the WHO says treatment is safe and effective, and has been in use since the 1960s.

Cameroon reported its last massive measles outbreak from February 2010 to July 2011 when 37 out of the 179 health districts in the country were affected.