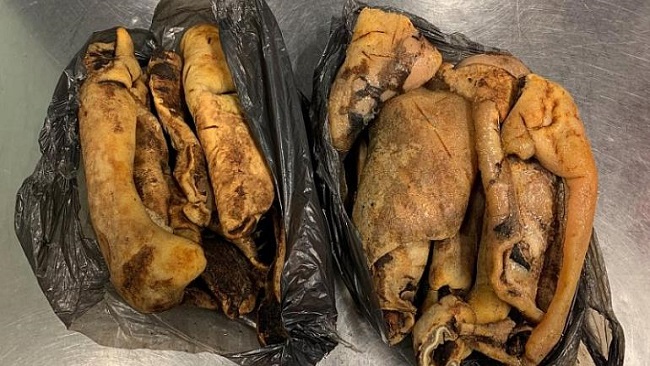 A woman wanted to import kilograms of rotten cow-skin meat into Germany, but was stopped by customs officers. It was a delicacy from Cameroon, she said according to a press release. The customs officials noticed the smell already from a distance. At the Düsseldorf airport, customs officers caught the woman with a rotten cowhide, a smoked cow-skin meat and the Cameroonian traveler spoke of a “delicacy”.

Even from a distance the officers at Düsseldorf airport had noticed an unpleasant smell. The woman had arrived from Cameroon via England. While checking her luggage the customs officers came across two plastic bags containing seven kilos of cowhide, a smoked cow-skin meat. The meat had stunk and was covered with maggots.

The woman had stated that her family wanted to eat the meat, which was “beautifully soft”. This was not the case, it was rather a violation of veterinary law and the city of Düsseldorf would therefore destroy the meat, according to the main customs office. The woman had to bear the costs.